The Adventure-Photographer Life of Dawn Kish Emerging photographer Dawn Kish’s style, with pigtails and jade Thai wrap-trousers, balanced her soft-spoken passion. Spanish guitar music played while she clicked on her computer, showing me photographs. The 36-year-old Kish has repelled from an arch in Canyonlands, run the Colorado River as a boatman and found herself the unexpected guest at an Oaxacan funeral. “That is the serendipity of my job.”

An avid river runner, climber and snowboarder, Kish prefers to go and play outdoors. But she finds her passion and work in recording others interacting with nature. “Whether it’s climbing or science in the Grand Canyon, I get into what people are about — their essence — and capture it. I get to play with light. That’s my job.” 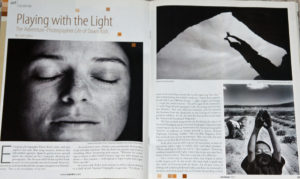 At 6 years old, Kish’s early interest in other cultures led her to a shelf of old National Geographic magazines. “I’d think, ‘I want to be traveling around the world exploring like that.’” She tried painting, but it didn’t work out. “I don’t have a paintbrush, but I use different things — light, angles and energy — to get my creative across.” The self-taught Kish interned at 17 with Flagstaff photographers John Running and the late Sue Bennett. They had different methods, and she learned the business from the dark room to the licking of stamps to promote exhibits. At 23, she shot her first professional essay for Transworld Snowboard Magazine.

She has worked assignments on fly-fishing for Sports Illustrated, backpacking for National Geographic Adventurer and a road trip on the Navajo Reservation for National Geographic Traveler, in addition to images printed in Sunset, Arizona Highways, Climbing, Paddler, Vibe and Bike Magazine. Kish has received prize-winning attention. Most recently, she won a place at the Red Bull Extreme Photo Contest.

Kish often travels with a party of researchers, writers or interested others eager to satisfy their individual passions. “Photo geeking is what we call it.” She laughed. “Shooting outdoors requires early light. I don’t like to get up early, but I know I have to do it.” But this is not the only difficulty.

On a recent trip to measure what they hoped to prove is the largest arch in the world, the team had to pack into the wilds of Canyonlands by horse. An all-day event of hiking and climbing followed with a one-hour turnaround to measure and photograph the arch before descending to beat the coming darkness. “Usually when we go out, we shoot photos for hours and hours and hours — all day long — but sometimes, it’s just minutes. That’s when you have to really know what you’re doing.”

Kish has her personal projects as well. She has a started a documentary book, called Dirtbags, that portrays rock climbers. “They give up everything to be a climbing bum,” she said.

Sometimes, Kish isn’t sure how to utilize her project work. As a boatman for the U.S. Geological Survey in the Grand Canyon, she rowed boats and took photos of science trips. Then, she created a documentary about their research along the river corridor. Getting her images out into the world is hard work, but sometimes, good luck or a tip from a friend helps. “Photography doesn’t lend itself to a paycheck every Friday. Sometimes you have to work and not worry about the money, and hopefully, it will follow.”

Those who travel with Kish have seen her play with her camera toys. Her “Diana,” a Holga-clone, is literally a toy. It is a cheap, plastic, model from Hong Kong. The Eighties-era, mass-marketed camera afforded quality problems, vignetting, blurring and other distortions, which became its signature appreciation among some photographers like Kish. Hers wears black tape to seal the lens.

She also documents the world with a half-frame Olympus Pen F. Created as a lightweight camera that increases a 36-exposure roll of film to 72 prints, Kish carries hers for that reason, delighting in its rougher quality. “The photos are just different…gritty, grimy and grainy,” she said, but its inconspicuous size puts subjects at ease. She takes some shots with it on every assignment, as was the case on a holiday in Oaxaca, Mexico.

On that trip, Kish and a friend were looking for a restaurant, and instead, found a funeral. “It was an accident. I saw all the long tables covered with white cloths and walked in. They told us that it was a private home. We apologized, but then as I passed by the window, I saw a sand painting of the Virgin de Guadalupe and bunches of candles. The family asked us to stay because of our curiosity. They gave us sweetbreads and hot cocoa and knowledge of their culture.”

The friendship was instant, and they spent seven days with the family, learning the traditions and celebrations of burying the dead. She shot the edgy events with her half-frame. “I like to tell stories — people are the inspiration.” NAMLM  Gail G. Collins