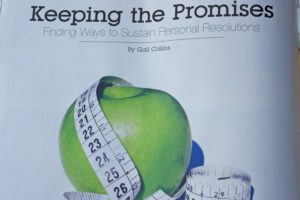 For gym rats, January is the worst month. Not because skating on parking lot ice terrifies more than tones or because working off stuffing leaves them winded. No, the month is bitter because New Year Resolution Reformers crowd fitness centers. Still, regulars realize that come February, Reformers will have given up and given them back the sweaty space.

Losing weight or getting fit is part of the larger scheme of improving overall health. This general goal dominates the list of resolutions made at the start of each year’s possibilities. And it should. As people reflect on a year gone by, many recognize the need to regain wellbeing. Whether it’s a health check up or a body makeover, we sense that what lies within us holds the answer to a better self.

Dorothy Jecmen, a licensed professional counselor with Sanctuary: A Healing Place, advised a new twist on our old pattern. “Setting goals and making resolutions can be fun if we start with the intent to be gentle with ourselves and engage the little kids inside us. Too often we make goals and try to change the negative behaviors with the critical edge that says we Need, Aught or Should make those changes.” Instead, she said, “Do it in a style that fits your personality and engages your childlike self. State the changes in a positive way. Be specific.”

Licensed Therapist Ben Gallaway, who owns Enchantment Workshops and Counseling, echoed that thought. “We are creators, so look at what you want to create and put that into a daily aspect.” Pacing ourselves is important. He said, “One day at a time, we can accomplish something realistic that leads to an end. You are empowered by what you know you want to do and what you can do.”

Albert Einstein said it this way, “The distinction between past, present and future is only a stubbornly persistent illusion.” But what if our obstinate past is standing in the way of embracing our vision on the other side?

We are neurologically wired for varying degrees of habitual behavior according to Gallaway. Whether it’s overeating, overspending or drinking too much, he said, “It’s about loss of control. We believe we can will our way out of an addictive process. We need support, strategic plans, reflection and spirituality. It’s about taking responsibility by seeing the whole picture and the consequences of continuing in our problems. There is a misconception that we have more willpower than one of us alone has, and we get down on ourselves when we’re tripped up.” He advised using an accountability partner and working with experts along whatever new path we are walking.

Rewards can play a regular role in the process. While quitting the smoking habit, Gallaway suggested putting the cash you would’ve spent on cigarettes each week into a jar and using the money in a positive way. These new routines should add value to our lives, not burden us. He said, “There is comfort in food and relaxation in smoking, so people need an equivalent reward in its place. Dignity and good health come in the long term from change.”

“Utilizing a belief system is a big plus for people,” Gallaway said. He suggested two books as resources. Dr. Wayne Dyer’s 10 Secrets for Success and Inner Peace teaches how to achieve a richer life with success as an intimate achievement as well as the method for accomplishing it. Holistic health pioneer Dr. Deepak Chopra sees success as a journey, not a destination. In his Seven Spiritual Laws of Success, he values the progressive realization of worthy goals. So, it’s about getting there one step at a time in our best way.

We build lasting change through a variety of variables. Jecmen wanted to lose weight for years and wrote it down each time. But it wasn’t until she changed her environment that she dropped the pounds. “I decided to become a vegetarian as an experiment, and the weight literally melted off. This was success even though I’d been writing down the same goal for ten years and not achieving it until now. Ultimately, lasting change means transformation. Transformation is an ongoing process and can be fun and deeply rewarding. You only fail if you quit trying.” NAMLM