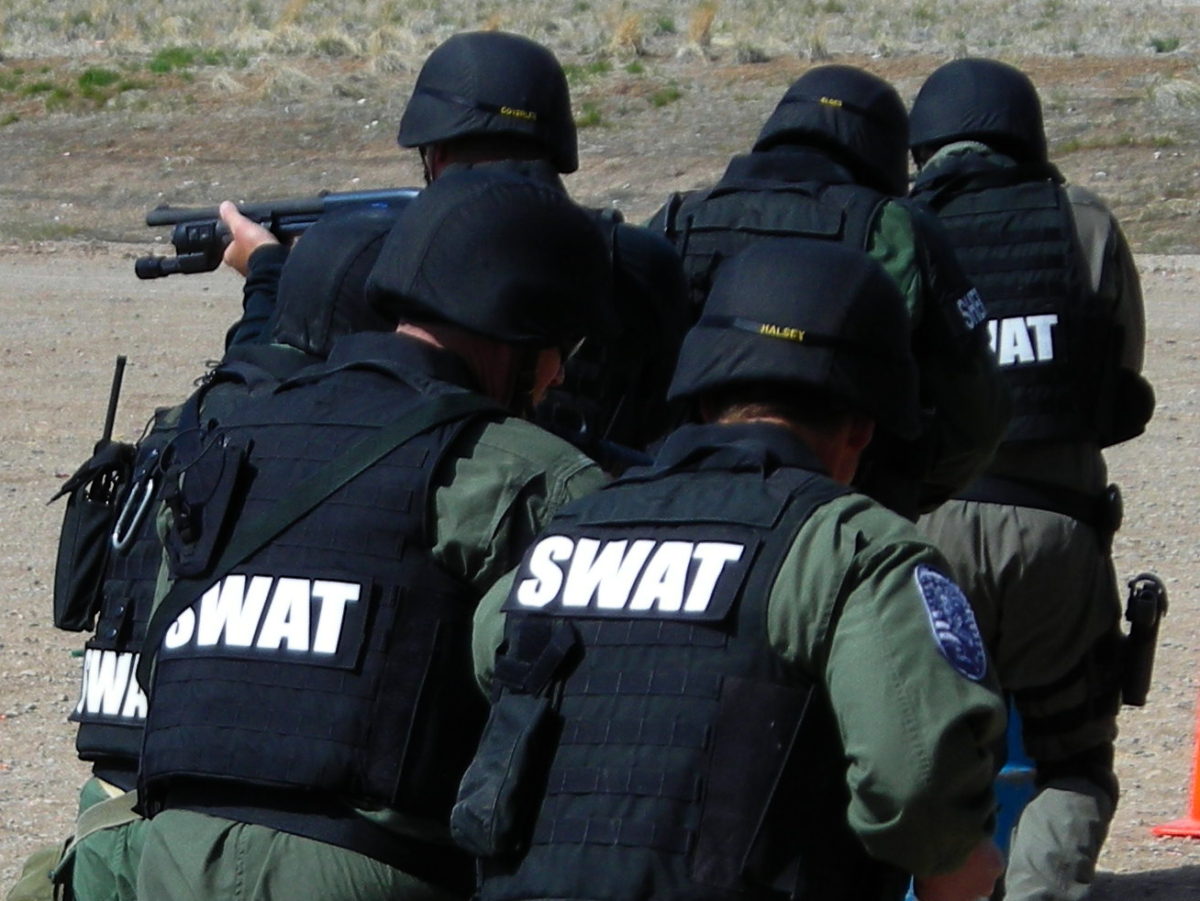 There are some grim and difficult things that we’re forced to learn in a lifetime. Physics homework or memorizing the driver’s manual is standard fare. But I’m talking about the things we never counted on learning. For some, it’s measuring their blood glucose for diabetes. For others, it’s filing for bankruptcy. And for my neighbor, it was dealing with your husband when he’s high on painkillers, waving a gun and threatening to kill himself.

And I’ve learned how these stand-offs play out. The process of reaching such a person is a patient, drawn-out, noisy and officer-intensive affair. Seven squad cars to be exact. I noticed the number early in the evening of that golden fall day. Seven is the perfect number, and I took it as a positive sign. You look for them when it appears all hell is breaking loose.

We’ve lived in our chalet-style mountain home for seven years. There is that number again. Being neighbors, you think you know people. But the reality is, even those who share our beds may not know the murky cave where pain dwells within us, wounded, selfish and scrabbling to hang on at any cost. Or in this case, making the decision not to hang on for one more minute. That was Larry.

Three years ago, our neighbors sold their successful tile business. They’d just finished remodeling the inside of their twenty-something year-old home, and I assumed their uses for granite and travertine had been personally exhausted. But it was the husband who fit that description. After failed disc surgery on a long-standing back problem, he went on disability.

Larry had more surgery followed by a stint in rehab for an addiction that too easily tempts a person who is in constant pain. Along the way, the scrawny man who drives a monster truck also became addicted to ink. I know this because Larry walks around shirtless, so that all are forced to enjoy the artwork tattooed on his body. Within our walls, we began to call the un-neighborly fellow Inky. As for his wife, Jade remained as gentle as our summer days here, but not as sunny. Their children also stopped speaking to anyone. Larry’s control cut them off, and the pain in that house stayed private. For awhile.

At moments, Larry had been creepily nice to us, but he lacked social cues — my first clue not to trust him. A clean stream? Unlikely. He was up at odd hours of the night, wandered all day and smoked by the pack. Still, each of us has redeeming qualities despite more overt evidence to the contrary. I’d noticed an effort in the man lately and hoped good things for all of them. The conversations I’d overheard with his son on car maintenance and the like had been tender and intended to mature Allan into a man.

It was early evening on that golden fall day as the painters loaded up their trucks at the neighbors’ home. Their youngest daughter giggled in the driveway with their Saint Bernard who acted like the kind of goofy dog that makes girls giggle.

Jade, now employed at the hospital, was hosting a charity jewelry party, so an inordinate number of healthcare workers were arriving. At 5:45 p.m., I stood at my front door as three cars nosed into our circle. A few of the ladies milled about, so I waved to them. Then, I caught sight of some police cars. Two more screamed around the corner before pulling halfway into front yards a the far end. More police arrived as I hurried out.

In the quarter-hour it had taken me to comb my hair and apply make-up, the world beyond my front door had morphed from Beaver Cleaver Street to a scene from Dragnet. “Jade, what’s going on?” I said.

“Larry is holed up in the house. He’s got guns and says he’s gonna’ kill himself. I sensed something was wrong earlier, so I sent the kids to their friends.” Jade said this to the air. Her eyes didn’t focus on me, but on what she’d seen in Larry’s face.

I tried to hug Jade, but she was wood.

“Excuse me, but you’ll have to go inside,” the policeman said to me. “Everyone off the streets that can be.”

And that’s how I became a prisoner in my own home for as long as Larry decided to remain one in his. One has endless hours to think when you can’t turn on any lights or a television or even walk about your floors. You venture questions like: if he fired a gun, how many walls would I need between me and him to stop a bullet?

What appeared to have been the perfect autumn day faded. Its glow became desperate darkness as I perched on a chair in my kitchen under the stove light. As I wondered what was next, a rap on the window over the sink rattled my nerves and any notions of safety.

Swallowing hard at the sight of the cop, I unlocked the glass and slid it open. “Stay at the back of the house, like you are here now, and wait,” he said. “The SWAT team’s on its way.” He also asked if I knew any of the neighbors’ phone numbers, because no one answered the doors at the other two houses. Lucky me, I work at home.

Two SWAT trucks arrived 30 minutes later. Already, troops had been storming the grounds with riot shields and shot guns, and this behavior continued with increased gear when the trucks disgorged their personnel. When the loud speakers began shouting, I had to peek. Even my vivid imagination was only so good.

A friend who’d intended to go to the party called me from down the street. “The SWAT team is going in with nonlethal force. I’m taking the three ladies home whose cars are stuck near Jade’s house. She’s waiting in the first police car in your court. Hopefully, nothing will happen.”

“I’m sure that is the plan.” I gulped my fears back. “Talk to you tomorrow.”

One of the SWAT trucks slowly rolled up to the neighbor’s driveway, no lights aglow on the mat black vehicle. A hatch like a submarine’s opened, and a man popped up. Another one inside began to speak through a PA system. His goal must’ve been to torment Larry or rouse him from his drug-induced slumber or encourage him to make contact. Maybe, all of these things.

And he did it by saying, “Larry, this is the Police Department. We’re calling your home, and we need you to pick up the phone, Larry.” The man did this for forty straight minutes. Occasionally, he varied the message, and only once did he stumble on the words. I couldn’t help but listen. A loudspeaker is just that.

From my chair, I pleaded, “Larry, come out…please.”

Men in helmets holding guns continued to run maneuvers around my home. They rotated positions, always posting one man behind my two large pines in the front not fifteen feet from my living room. Night enveloped us.

Eventually, the message from the SWAT truck changed. “Larry, this is the Police Department. We’re bringing a telephone, so that you can speak directly to our negotiator. Larry, we have a negotiator.”

To deliver this phone to Larry, one guy opened the garage door from Jade’s car in the driveway. Now, we’re gonna get somewhere, I thought. And to spotlight my worries, the garage lamp shone on the men dashing about.

Three hours had passed. I’d eaten some canned soup and moved to the master bedroom, further removed from a bullet’s flight path. Too soon though, I grew bored with anything meant to distract me from the chaos beyond my yard. Who could read with that constant message blasting through the night? I’d gotten past feeling vulnerable and slinked along the wall to a front bedroom, stationing myself directly in the line of fire. Then, I cracked open the patio door to keep tabs on the stakeout. It somehow seemed safer to see what was going down than to worry about going down. Or so someone would’ve had to assume when they found my body slumped in the corner with a gaping hole in my chest, hand clutching the edge of a drape. Why didn’t they bring me a shield or vest?

There was nothing to do but wait. I wondered why no one breaks down the front door and storms the place. “Jack Bauer, where are you?” I whispered. Surely, Larry will be overdosed, comatose or dead if they don’t reach him soon. No information coming in isolated me.

“Larry, please pick up the phone and talk to us. We have a negotiator, Larry.” The SWAT guy repeated the message for another half an hour as men scurried this way and that. In and out of the neighbors’ garage and around the side, they ran. Suddenly, three of them looked up at their partners on the roof. They must’ve climbed up to their two-story roost via the painters’ ladders.

Though I’d heard no shots all night, my thoughts ran wild like the men racing around. Larry might come through my kitchen window – I’d forgotten to re-lock it. What if he’d found my spare key outside?

The man with the message finally stopped talking, but another one inside the house took up a chant. “Larry, we want to help you. Answer the phone or let us come up. Come to us, Larry. We don’t want anyone to get hurt. Larry?” He shouted for a good twenty minutes.

And to my relief, after nearly five hours, an ambulance pulled into our court. This could only mean an end to the siege, and Larry was safe. But I kept my vigil to be sure. They wheeled Larry out on a gurney. Later, I found out he had three guns, and they Tazed him to bring an end to it.

Nearly twenty SWAT members emerged from the shadows with numerous cops. As they massed in the court, I wondered, what could be in the enormous satchels the teams carried back from our yards? Then I sighed, realizing Larry couldn’t have left his house without being surrounded.

Once the ambulance was loaded, the exodus began. A SWAT truck lumbered away, two police cars followed, the ambulance moved, another squad car rolled, and then, the second SWAT van joined the parade, leaving the remaining black-and-whites to take up the rear. From the looks of it, our town must’ve been open season everywhere but Firestone Lane.

Quiet and fatigue ruled the dark as Jade trudged into her house with a lone officer.

At two minutes before eleven o’clock as I crawled between the covers, an engine fired up in my driveway. Allan was retrieving the truck I’d let him park at my house. It was them, I discovered afterward. It was the kids that dialed 911, forcing their family situation onto the police blotter. Jade had wanted to keep it quiet. I shook my head that night, and for many days after. He’d made her crazy, too. My hand flew up in a friendly gesture to Allan, but I had no idea if he saw me.

That night was an education in darkness. Things we didn’t want to know were forced on us. Things we had no choice but to learn. For my part, I witnessed police implementing more patient persistence than I understood was possible after watching television dramas. The teams exercised vigilant control by not using the weapons they were trained to fire – a strategic irony of restraint that kept our community safe.

That night was also an undeniable terror, but I can leave it behind. I was only an observer, an unwilling witness to that murky, wounded, selfish, scrabbling cave where pain lives. I could wake from that nightmare and move on. How would they?