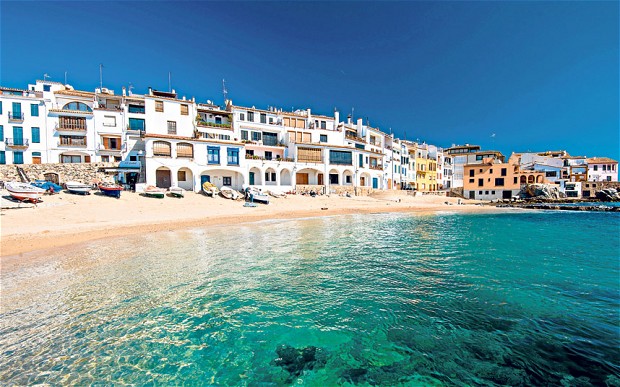 When I was a child in 1967, Marty Robbins wrote A Spanish Lullaby whose lyrics embrace a father’s tender words of comfort to his child. “…dream while the angels watch over you. I will hold your hand. And when you wake with the morning, I’ll still be here.” One night in Spain, I awoke to the truth that I am still a child, holding fast.

We were the lucky ones though it did not feel like it, but moping in misery blurs one’s perception. At the time, Jim and I lived in Europe with our four children, ages six to fourteen, reaping all the adventure and awkwardness that a life abroad brings. Jim’s oil project — behind schedule and over budget just for starters — kept him working seven long days a week. We had location, location as the saying goes, but we were not making the most of it. Our family desperately craved play, something that required only time and imagination — two precious commodities in any country. A haggard Jim looked at me one night and said, “Let’s go to Spain and rest awhile.”

Costa del Sol held up her end of the promise. The sun shone endlessly on an arid landscape of beaches and cliffs reminiscent of our early married life in California. Each child chose an activity that pleased them, and we played! The children dove like dolphins through sparkling water, and stars glittered above our townhouse patio while jasmine’s perfume suffused our slumber. This happy-looking family had potential.

As a couple though, Jim and I were struggling to recover from broken trust and hurt. On the first night against this romantic backdrop, we sat on the bed facing one another and an argument. This had become our pattern on trips, picking at a wound that needed to heal. With little time to ourselves in a busy home and busier job, we avoided the real work of restoring our relationship, until the intimacy of 24-hour vacation days forced us to connect.

In Spain, I decided to stop pulling at the fraying edge of our life. “Honey, I miss being us. We made four babies and loads of memories, and I don’t want to give any of it up. But I feel like we’re both losing with all this fighting.” I knew Jim felt scared. He had told me so, and that was not easy for any man to admit. I laid my open hands on the bed, and continued, “We’ll never be who we were before this pain, but I believe we can be better for it. Let’s be kind to one another.” Jim laid his hands in mine. A start and a pledge.

With only one week to experience Andalusia, our days alternated lolling on a beach with tripping around the countryside. On the days without snorkels, we whispered inside Granada’s Moorish Alhambra, conquered Malaga’s Gibralfaro Castle, rode a bicycle built for six, and unfortunately, mis-timed a siesta in Seville.

Seville proved hot—nearly 110 degrees—and after our three-hour car journey from the coast, we arrived with only enough time to snatch lunch before the city fell asleep. Our cultural mistake. Travelers retired to their cooled bedrooms or paddled in their pools while we rambled over scorching pavestones trying to amuse four youngsters.

“Daddy, can we have another ice cream? I’m roasting,” said our youngest.

“If we can find someplace that’s open.” Jim wiped his forehead against his arm. But instead of an ice cream shop, we found ourselves in Parque Maria Luisa. “Hey, how about rowing a boat around these gardens?” he said.

The children’s flushed faces wore smiles as I snapped their photo, all frustration forgotten in the rescue of a drowning bird.

Later, a dusky coolness breathed vitality into the city and us. Strains from a string trio serenaded us as we dined on paella in a sidewalk café. Seville tempted us.

“Daddy, I don’t want to go back.” That was our daughter, saying what we all grasped — the day’s fun had really just begun.

We toyed with spending the night to enjoy a glass of wine and poke around in the shops, but without clothes or a reservation, we reluctantly loaded everyone into the car for the long drive back to the seashore. We felt the magic slip away with the city lights, and the children’s heads slumped on each others’ shoulders in slumber.

As we raced through moonlit fields of sunflowers, Jim and I talked in hushed tones about trips we’d taken before, reminiscing in turns.

“Remember camping with the children on our anniversary when it rained so hard, it misted through the tent, but Aaron caught his first fish.” I loved the photo with Aaron’s big grin and his younger brother’s flip-flops on the wrong feet.

“And when we drove across the plains for two hours with that lightning storm in the distance. The kids said it was the best show they’d ever seen.”

“How about Hawaii when we first suspected I was pregnant, and we thought we’d never be able to have children!” I’d never been so glad to be wrong over and over again.

It thrilled us to retrace our steps, but we felt a little unsure about the ones ahead of us.

The trip wore on, and I babbled simply to keep Jim company while he drove. I fiddled with the radio and found amidst the crackling of distant stations, the intricate rhythm of a Spanish guitar. We smiled at each other. Then, Jim winked — his shorthand for I love you.

Recognizing the final thirty-minute leg of the journey, we relaxed. Only a string of small villages along the towering shoreline lay between us and our beds. A few lights and then, pitch dark. More twinkling houses. Then, a black gap. And in the failing blink of an eye, I crossed the line to sleep. Another nodding head.

An urgent voice filled my dreams, “He’s not awake!”

My eyes flew open as I yelled, “Are you awake?”

“No!” Jim said, playing his role in the morbid comedy.

The car roared over the shoulder of the bending road. Gravel sprayed out from the cliff above a roiling sea. No guardrail. For a dangling moment, I saw nothing but the

luminous face of the moon gilding waves that eventually crashed on the rocks below. Silence. Time hung there.

Then, the boom of blood pounding in my head deafened me. Like paddles from a crash cart charging the hearts of six people, the car electrified. The air crackled like lightening, prickling every hair. The raw terror slapped the breath from us. Our lungs sucked, struggling and choking.

With postures bolted upright and eyes forward, each of us was struck dumb. As the car moved along the pavement — towards bed, towards tomorrow — we were aware of only one thing: We were saved.

As the shock pulled back like the tide to reveal the sea’s treasures I wondered, why this chance to look death in the eye? A week ago, we might have thrown away a chance at saving our life together after only a harrowing night of ugly words.

Maybe though, the threatened loss of companionship with someone you are both remembering and yearning for offers the ideal conditions for dreaming anew. What would we do now?

“A man told me you were sleeping,” I said to Jim.

“I didn’t know I was,” he said, blinking hard. A hysterical hiccup escaped his lips.

We held hands on the mattress of our hotel that night. And in the difficult nights afterward, God held both of our hands, establishing forgiveness. Our family was the only one afforded a vacation that summer. Our company canceled all time off after our return.

We had been more than lucky, and we realized it. In fact, we cannot forget it. A dozen years on, the cycle of our lives – including college graduations and a wedding – honor that night we could have lost every precious thing.

Like A Spanish Lullaby all our own, that trip forced us to dream of being whole again while the angles held our hands, and we woke to new days. And as our Father says, “I will be here.” Yo estare aqui.