Artist Redwing Nez Feeds from the Roots of his Reservation Life 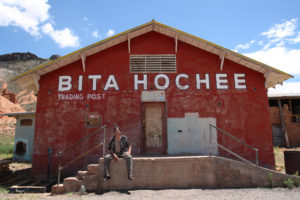 Arriving at the defunct Bita Hochee Trading Post on the Navajo reservation, it was impossible to miss its striking butte. Bita Hochee means “red rock runs through it.” The trading post — north of Holbrook and about a two-hour drive from Flagstaff — serves as the studio for celebrated Navajo artist Redwing Nez.

Inside the studio, Nez pulled out two mugs. His cup came from Costa Rica like his coffee beans, and the artist chatted while setting up the brewer. “This used to be the old wool storage. I climbed around in the rafters when I was a boy. Wool was the biggest — and the only — income here when Bita Hochee was built around 1870. And finally, we’re at the phase of having electricity.” He flipped the switch on the Mr. Coffee.

Jazz played on a boom box in the corner, and Nez relentlessly turned the conversation to Pepe Masis, whom he first met 15 years ago. “He was from Costa Rica and had this fantastic accent and loved art. Pepe invited Native American artists over for coffee regularly, Costa Rican coffee of course. There were a handful of painters like me — all men — and we brought our babies. They climbed all over the place. Pepe is the one that had the vision for this studio,” Nez said. 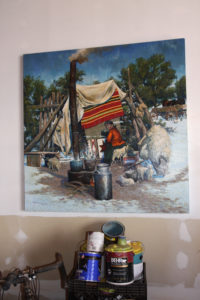 Three works-in-progress, as well as a few finished pieces, showcased the cluttered studio. On one wall hung an enormous representational oil of his paternal grandmother called Weaving, First Snow. Another canvas, titled Treaty of Bonneville, showed Chief Barboncito reviewing the 1858 document that reduced the Navajo lands and led to the Long Walk to Washington D.C. A decade later, the chief renegotiated the treaty, allowing his people to return to their homeland. This devotion inspired Nez. 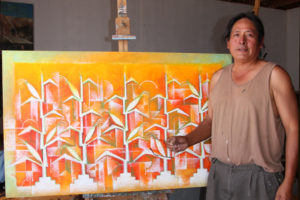 Prayer of Convalescence. Nez gently touched the angled honey and spring green corn stalks on a fiery background. “A lot of people are remembered here. We worship white corn — morning corn, the corn of life. It’s a prayer, a chant. I think we need that now, and there is power in this place.”

As we drank our coffee, Nez shared the story of his maternal grandmother Jenny Manygoats, Bita Hochee, and of course, Pepe Masis. “Pepe went back to Costa Rica for several years, and I took care of my grandmother — it was just her, me, the dogs and all the goats. But then, Pepe came back looking for me, tracked me down. He wanted to promote me.”

Nez loaded paintings into his friend’s 1989 blue Isuzu Rodeo and they visited galleries and patrons around the Southwest. “Pepe told people, ‘He’ll be a more unique Navajo artist if he stays put in Bita Hochee — he needs a studio.” People gave money, support and encouragement.

In 2004, Pepe died. Nez looked at the inherited Rodeo and thought about leaving the reservation. “I told my grandmother that this will be the last year I keep trying. It was all such a steep incline, and then, to lose my friend… ” The 87-year-old Manygoats brought out an old bag and laid it on the table. She offered her grandson whatever it contained with one condition.

“She told me, ‘You need to show roots.’” The bag held documents, including a title to land nearby which Manygoats deeded to Nez. His landowner status satisfied tribal policy, and when someone donated the land around Bita Hochee as a historic parcel for lease, renovations began.

The trading post’s rich history always included the Nez family. The painter pointed to the hill. “When I was eight, I used to run the sheep through that pass and let them graze over there. Then, I could run across to Bita Hochee and buy an ice cream or soda. The owner was the only blue-eyes who spoke Navajo.” With that, Nez sat on the steps like the boy he once was. “This place is a time capsule for me.”

Nez started painting after high school and reflects as he works. “Painting is all about feeling, and each piece must be better than the last.” This dedication led to the mural Nez designed and painted for Flagstaff’s Visitor Center. “Bruce Aiken felt strongly about what I could do with the brush.” What Nez didn’t foresee was the exposure the mural would offer.

Although his paintings sell at Puchteca Trading Post and are displayed in the Museum of Northern Arizona, some people want to meet the artist. “They see the mural, Google ‘Nez,’ and drive out to Bita Hochee. I sold six paintings last month.”

How does Nez envision demand over time? “When I see other artists with giclée, I think, this is what happens in time. You can’t tap dance as fast as you used to, so you sell prints.” Then, he did a few spry steps to prove he wasn’t there yet. NAMLM