Teaching thrill seekers that the sky’s the limit 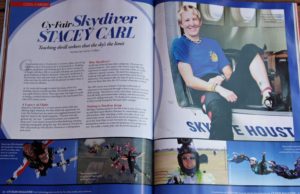 Grandmothers do it. Doctors do it. Lawyers, pilots, and oil rig mechanics do it. Servicemen do it. Gymnasts do it. Wedding couples, graduates, and birthday girls do it. Over a weekend of bright, still days, 200 or so people will jump out of perfectly good airplanes at Skydive Houston. From over 10,000 feet in the heavens, they leap and smile as they ride the wind at 120 miles per hour to catch up with the ground far below them. It is the rush of a lifetime.

At 18, you’re old enough to make the jump, and on her birthday, Stacey Carl did just that. The tandem jump in 1998 was a gift from her father. Three days later, she began the path to being a certified skydiver, enrolling in the Accelerated Free Fall (AFF) jump course.

A Legacy of Flight

Raised in Colorado by a 33-year veteran airline pilot and lifelong flight attendant, the skies held only opportunity for Carl. She finished out her senior year juggling demands, but kept her hand in the skydiving game. “I learned from the ground up,” she says. “I packed parachutes and worked the drop zone.” Carl stayed connected to that skydiving company, learning videography along the way. She moved to Houston in 2007 and joined up with Skydive Houston as a videographer and coach.

Skydiving clients fall into three categories. There are the tandem jumpers – first-timers who want a mind-blowing experience to mark a milestone, overcome a fear, or simply celebrate a special occasion. The next two categories are made up of people who need to repeat that mind-blowing experience. Fun jumpers take the leap for pure recreation, and there are those that take the AFF course to become teachers.

The AFF course now includes 25 jumps with levels of education to be mastered through written exams and practical skills testing. “You learn to pack a parachute, and demonstrate free fall skills, movement under canopy, and survival skills,” says Carl, adding seriously, “It’s designed to teach you how not to kill yourself during free fall and under canopy.”

Making a tandem jump for the first time is easy. Clients sign up and show up at Skydive Houston in comfortable clothes and sneakers. After watching a video, you take a half-hour instruction course. And if you’re nerves of steel hold, you ride up in the Twin Otter to test Newton’s law of gravity. You are harnessed in tandem to a trained instructor who jumps with you. You smile, scream, pray, and fly for 60 seconds of thrilling free fall before opening the parachute. Under a serene canopy, you then glide for about seven minutes before your coach navigates a precise, soft landing. After that, highfliers inevitably give one another high fives. All that’s left are the memories.

As a videographer, Carl helps clients make the memories of their jump last. “I have the most fun and creative aspect,” she shares. “Forty percent of people who jump won’t remember what happened up there – it’s overwhelming. If someone is amped, we feed off it.” She documents that joy in the journey for recreational jumpers.

She does the same for her showcase work for organizations like Women’s Texas State Record. For that particular group project, women bailed out of several planes, linking up for 38-way sequentials, meaning 38 women held hands in two formations with the requisite three-second hold. “It’s novel, creative, a one-off,” shares Carl. “It’s also proof they made the record.”

In contrast to the crazy idea of intentionally falling from the skies, people who skydive for a living are deadly serious about it. Carl remembers an instructor saying, “Every time we jump out of an airplane, we’re committing suicide; it’s a matter of not following through.” She estimates 85% of fatalities occur under canopy. This means the jumper has deployed the parachute. “And 100% are experienced jumpers,” she adds.

Carl’s husband, Don Derby, a pilot for Continental ExpressJet, adds, “It’s the big sky theory – the idea that there’s enough room up there for everyone, that the sky’s so wide open, you can’t run into each other.” People assume someone else is watching out, and no one is.

So, does Carl think about dying and the inherent dangers of the job? “Every day,” she says. “It keeps us sharp. Complacency kills.” The reality is that in 2010, from 3 million jumps made nationwide, only 21 deaths occurred. Experienced jumpers are just that and respect the skies they blaze.

Making a Jump Your Own

Skydiving is unique in and of itself, yet people do it to mark special events. While one gal flew to earth, her boyfriend laid out a sign on which to land that read, “Will you marry me?” A pair of lovebirds married after landing, while still clipped in to their harnesses. Another couple celebrated an anniversary while gliding from the skies. A mother spread her soldier son’s ashes, leaving him in the heavens as she flew. And a grandma simply celebrated being 80. Even ability-challenged adults – the deaf or blind, an amputee, or paraplegic – can skydive and experience a new horizon. For those that try skydiving, life’s other challenges just don’t seem so scary anymore. CFM