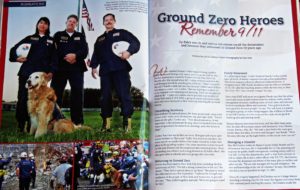 When Cy-Fair resident Denise Corliss began training a golden retriever named Bretagne for search and rescue, she had no idea his first deployment would be Ground Zero in New York City. Shortly after the second tower fell, Corliss received word that she and Bretagne would be searching for survivors. “When I received the call, I was honored, but nervous, because I didn’t know if there was more to come,” says Corliss. “But our training is in place, so as we respond we’re thinking and planning. There are strategies of what to do.” Corliss is a canine search specialist and member of Texas Task Force 1 (TX-TFI), a group of search and rescue volunteer who were deployed to New York City following the terrorist attacks.

One of about 28 national teams, the Texas group made camp at the Javits Center with crews divided into day and night shifts. “Twelve hours on the pile,” Corliss says. “Then decontamination. It was important to decontaminate the dog, then [we headed] back to the [base of operation] for some food, meetings, and a few hours of sleep.”

Corliss’ function was to find survivors. Bretagne’s job was to alert rescue workers to “live scent.” Sadly, they found no one alive. The team stayed two weeks before other teams rotated in to take their place in the grueling routine. Like other members, Corliss focused on the task at hand and decompressed after returning home. There, counseling was offered, and testing showed no ill bodily effects. She also gave talks to schools and civic groups after the event.

Corliss has been back to New York City twice including the first anniversary of 9/11. “I’ve felt a strong connection to the city,” she shares. “They have a special place in my heart.” She plans to attend the 10th anniversary this September. “I admire the strength and resilience of the people of New York and

Americans, in general,” she says. “They pulled together and said, ‘We’re not going to stand for this.’”

As a planning manager, Corliss’ husband Randy Corliss coordinates all levels of disaster response through action preparation. This drives response efforts to effectively utilize resources. A firefighter since 1995, Randy decided to join his wife as a member of TX-TF1 after her haunting absence while she was away in New York City. “9/11 was a family-changer,” he says.

Also a state EMT and arson investigator, Randy says that the urban search and rescue model evolved from the military with a similar management structure, enabling teams at local, state, and national levels to coordinate efforts and materials. “Our goal is to do the most good for the most people,” he says. The task force is a mature emergency group, so when things happen, like wildfires or floods in the Hill Country or a hurricane on the coast, we are good at reaching sites and meeting needs.”

Natural disasters have been his focus, and like other team members, he reels off hurricane names with familiarity: Ivan, Dennis, Gustav, Katrina, Rita, Ike. “We need a plan before the team goes out the door, but often, it evolves and changes,” says Randy. “We’re the ones who stay up the night before, so the rescue crews can act.”

Mac McClendon works for Harris County Public Health and Environmental Services. He is responsible for Cy-Fair planning and response for public health emergencies, working closely with Cy-Fair ISD, Cy-Fair Fire departments, and Cy-Fair EMS services, as well as others. He is also a safety officer with TX-TF1. McClendon oversees the departure and return of the team, plus its welfare and safety on site. “We are risk managers for hazard mitigation – the eyes and knowledge at the site of a disaster,” he says. McClendon was also a rescue specialist on Sept. 11, 2001.

When the tragedy happened, McClendon was in College Station attending a training class for the team. Key figures were away from their national posts teaching the course. McClendon recalls the moment the instructor walked in with the tragic news. “He was white as a sheet and simply said, ‘A plane flew into the World Trade Center,’” he says. “We thought it was a joke, but then, everyone’s pagers started going off.”

When McClendon worked the pile in New York City, he found no survivors. Unfortunately, he came across the remains of city firefighters and other rescue personnel. “It’s hard to find your own,” he says. “We train for this, and as a 25-year veteran firefighter, I’ve seen A to Z, but something of this magnitude…” McClendon trails off as so many others do when they think back to that day.

There aren’t words for what these Cy-Fair first responders saw and smelled. As normalcy returns and priorities take over everyday life, McClendon worries about our nation’s safety. “People become complacent, but the images of what happened there are embedded in my brain,” he shares. Like others who have witnessed evil, the future concerns him. That is why there is Texas Task Force 1 – ready, willing, and more than able to take on life’s emergency situations and help our nation stay strong. CFM