After battling serious illnesses and overcoming the odds, these Cy-Fairians are dedicated to giving back 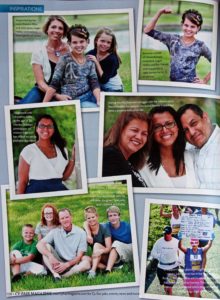 Fighting for their lives taught Cy-Fair residents like Martha Ocampo, Logan Holley, and John Bonner to persevere through pain, fear, and tough odds. Healthy again, they credit family and friends for their unwavering support. The three also show a tenacious compassion toward others who are still in the struggle.

In 2007 at the age of 20, Martha Ocampo began a battle with ulcerative colitis. This inflammatory bowel disease with its chronic inflammation of the digestive tract causes abdominal pain and diarrhea. It can be debilitating and can sometimes lead to grave complications. “The disease completely deteriorated my health,” Ocampo says. “I relied on my father to carry me out of bed, my mother to bathe me, and my brothers to feed me. In three short months, this disease stole my life.” Ocampo had three surgeries, followed by a grueling recovery.

Now 24 and a full-time student at Lone Star College-CyFair, she admits the grind was as much mental as it was physical. Besides the humbling frustrations of learning to walk again, Ocampo had to embrace what she calls the “new me.” The surgeries left massive abdominal scars and her ileostomy bag—used to aid the small intestine in properly disposing of waste—served as a constant reminder that she wasn’t normal. “It’s not been an easy road, but I have learned to love each and every one of my scars,” Ocampo says, seeing them as symbols of restored health.

Her parents, Hector and Maria Ocampo, were her rocks as she fought to heal. “My mom never let me utter a word of defeat,” she says. “Attitude is everything when dealing with an illness.” And her cousins kept her laughing, while long-distance friends phoned regularly. “I was able to stay strong, because I was always reminded I was not alone,” says Ocampo. “And my church never stopped praying for me, even when it seemed like all hope was gone.”

Ocampo now participates with Tallowood Baptist Church’s mission trips to set up pediatric day clinics and is currently raising funds to provide access to medicine and supplies in her home country of Nicaragua. Ocampo shares, “I am blessed to have had experiences of complete brokenness, because they’ve taught me that I’m stronger than I ever knew.”

In the summer of 2010, Logan Holley came to her mother Shawna Allen with cramps, perfectly normal for a 13-year-old expecting her first cycle. Two weeks later though, nothing had happened, but the pain continued. A CT scan revealed a mass. “It was a mixed germ cell tumor—part malignant and part benign cells,” says Allen. “They’re commonly found in the ovaries or testes—think Lance Armstrong.”

By the time Holley had surgery three weeks later, the size of the mass had grown from a compact racquetball to a bloated volleyball. It displaced her kidneys, began to shut down her liver, and overgrew

her ovary. The survival rate of mixed germ cell tumors is low and the treatment with chemotherapy intense, as Holley’s mother can attest. “By the time her systems were nearly back to normal, it was time to start another round,” says Allen. “She struggled with losing all her hair. It’s so traumatic for a teenager.”

At Cypress Academy of Gymnastics, where Holley is a member of the Prodigy All-Stars, her teammates held a fundraiser to help shoulder the loss of Allen’s income, plus the hotel expenses she incurred while caring for her daughter during treatments. Neighbors and close friends kept the family’s spirits up, and the cheer squad fashioned bouquets of paper flowers to decorate the hospital.

No stranger to fundraisers, Holley gathered her friends between rounds of chemotherapy to sell lemonade. “I’m swelling with pride that Logan always wants to help others,” says Allen. “Their first customer that day threw in a $100 bill. Logan presented a check to the children’s ward at M. D. Anderson, where they plan activities every day for those kids.”

A New Perspective on Life

John Bonner is 44, a father of three children, and now, an avid runner. His health crisis began with a simple gesture. His wife Julie reached out to touch a knot on his neck last summer and questioned the lump. After an ultrasound and biopsy, he got the bad news. Bonner recalls, “You run the full gamut of emotions when you hear, ‘It’s cancer.’”

He has a family history of thyroid cancer. Still, the surgery, including the removal of 86 lymph nodes plus nearly 40 radiation treatments was tortuous for Bonner. “My salivary glands were ruined, and I had to re-learn how to swallow, but it wasn’t all bad,” says Bonner, humorously pointing out, “I lost 62 pounds.” Like many busy family men, Bonner’s weight, glucose, and cholesterol had spiked. They’re in normal ranges now, a result of his regained health.

While in treatment, Julie wanted to create awareness about cancer. She ran in her husband’s honor to raise money for the American Cancer Society in the New Orleans Rock ‘n’ Roll Marathon. John became fighting fit and joined her in January to run a half-marathon. Her goal for 2012 is to raise $13,100 to symbolize the race distance. Bonner can’t say enough about his loving wife. “Julie did everything for me,” he shares. “I asked, and she did. She was strong for me and saw the bright side of things.”

Priorities shift when faced with losing everything a man holds dear. And so they have for Bonner. “It’s easy to take the small things for granted,” he says. “We have a list of activities and things to do, but I just enjoy looking at my three children.” CFM