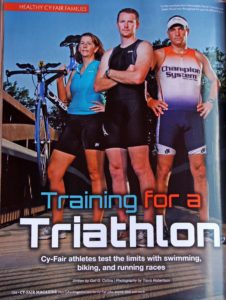 When Patrick Timmons’s best friend challenged him to compete in an Ironman triathlon, he signed up and began training. On race day – a cloudy, summer morning – Timmons swam 2.4 miles before mounting his bike. The sun burned through as Timmons cycled 112 miles. Heat flared off the pavement, so he took advantage of nutrition and hydration offered at the halfway point. By the time Timmons kicked off on three nearly nine-mile running loops to complete the race, his stomach hurt. He felt sick by mile 10 and drank a cola with ice to settle his stomach. His worst fear was throwing up the fuel needed to continue or upsetting his chemical balance. Timmons lost it all anyway, but felt better. More cola and ice with more running, and in the 11th hour, Timmons crossed the finish line.

“My goal was to finish – to come in smiling with my family all there,” says the 26-year-old chemical engineer. Under punishing conditions, Ironman triathletes face both mental and physical challenges. Timmons confesses, “Ironman or any triathlon is one big, long conversation with yourself all day. And the training beforehand is 24/7, getting ready for workouts for months just to make it to the event.”

One Race Leads to Another

Timmons trained for the MS 150 in college. When it was rained out, he considered triathlons and began cross-training to run long distance. After a marathon in January 2010, Timmons put his name in for two sprint triathlons, which are approximately one-eighth of the distance of an Ironman race. He progressed to competing in an Olympic triathlon and 10 months later moved up to a half Ironman.

Stepping up the length of races he competed in was tough, especially without much repetition of each different level. “I struggled with how to eat right for longer and longer distances,” says Timmons. “A triathlon is really a four-sport event: swimming, biking, running, and nutrition. People can be good at any one, but the combination of them as an event gets most people.”

Justin Wood agrees. “Ironman is the longest single-day endurance event in sports,” says the 41-year-old police sergeant. He is an avid triathlete and two-time Ironman finisher. “The most challenging part is overcoming the obstacles of every race and continuing to press on,” Wood admits. “It could be a flat tire, feeling sick, or suffering a blister and not quitting, but to keep moving forward and cross that finish line is where the mental fitness to persevere comes into play.”

Wood began competing in triathlons in 2008 after growing bored with his regular running regimen. After four marathons, nine half-marathons and more, he became interested in the journey of training for triathlons and the unique experience of race day.

A bonus was the camaraderie of athletes who desire to improve each leg of the race. “When it all comes together, and you find that sweet spot of fitness, perfect race conditions, and great results on race day, there is no replacement for that feeling,” Wood says. He finished his first Ironman in a respectable time of 11 hours 46 minutes and was hooked.

Triathlon training involves plenty of swimming, biking, and running. Wood recommends determining the distances you want to complete, then joining a group or finding a running partner to begin training with. “The sprint triathlon is the most abundant [type of race] in our area and is the most popular for first-timers looking for a fun and new challenge,” says Wood. “One of the most popular sprints in the Cy-Fair area is the Bridgeland Triathlon put on by OnUrMark Productions each August.”

As a husband and father, triathlons became a family affair. Wood’s wife Jennifer is an avid cyclist with two sprint triathlons to her credit. His son Derek, 20, has completed a duathlon, while his 14-year-old son Tyler competes in cross country races and sprints for a family relay triathlon. “The training journey that one embarks on for triathlons reinforces the desire for a healthy lifestyle,” says Wood.

Keri Ottenwalder is married to Ken and is a mother of five. She also finds family involvement satisfying when training for triathlons. In fact, she introduced them to triathlons with the goal of getting back in shape. “This is a way we can stay physically fit and show our children a healthy lifestyle,” she says. Since starting triathlons, all of our children have become more active. At first, it was a way for me to have ‘alone’ time, but the family aspect is so much more rewarding.”

In September 2008, Hurricane Ike delivered a devastating blow to the Ottenwalder home. The younger children and Keri moved out, while Ken and the teen boys helped re-build their house. Stress and a lot of fast food took its toll, so Ottenwalder joined a gym and running club. Her ears perked up at the mention of a triathlon, and she signed up. “Ken said, ‘I’ll meet you at the finish line,’ so I signed up that moment,” she says with a laugh. “Mind you, I didn’t have a bike and had never swum a full lap in the pool, but having the race on the calendar certainly gave me something to work towards.”

In 2009, she completed five sprints and began 2010 with an Olympic race, as did Ken. Ottenwalder wrapped up the year with a half Ironman. Their 9-year-old daughter also did her first race in May.

In June, the Ottenwalders enjoyed competing in a family relay, with Keri swimming, Ken biking, and their 16-year-old son running the five miles to the finish line. CFM