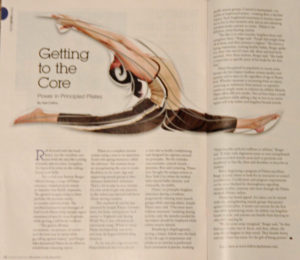 Roll forward with the head heavy. Let the vertebrae connect with the mat like a string of pearls, one at a time. Lengthen the leg as if to write on the ceiling. Scoop your belly.

The verbal cues Bonnie Berger offered during a range of Pilates exercises created pictures that translated into bodily responses. The guided imagery helps a client perform the motions neatly, accurately and effectively. The certified instructor and manager at Full Circle Pilates, Berger helps people regain awareness of specific muscle groups while getting a full-body workout.

“The goal is efficient movement—so posture, of course—and the best way to move to guard against injury,” said Berger who discovered Pilates in an effort to rehabilitate a dancing injury.

Pilates is a complete exercise system using a mat or an apparatus fitted with spring resistance called the reformer. The routine focuses on strengthening the core to create flexibility in the arms, legs and supporting muscle group as they increase kinesthetic awareness. That’s a lot to take in as a concept. It’s even more to put into practice, so the verbal cues remind and focus clients during a session.

This method of exercise was invented by Joseph Pilates. German born, the boxer and gymnast had moved to England, and during World War I, was ordered to an internment camp. While in camp, Pilates developed the mat work, and soon, began rehabilitating detainees.

As the son of a yoga instructor, Pilates believed the mind played a vital role in bodily conditioning and designed his regimen around six principles. The list includes: concentration, control, breath, precision, flow and centering. Pilates later brought his unique system to New York City where he worked with injured ballet dancers, and eventually, the public.

Pilates’ six principles heighten awareness, progressively relaxing some muscle groups while exerting others. Joseph Pilates once said, “One must move without tenseness,” meaning during activity, only the muscles needed for movement should be employed with others remain relaxed.

Breathing is diaphragmatic, setting a tempo. Inhale into the back of the rib cage in preparation and exhale as an exercise is performed. Each movement is precise, working specific muscle groups. Control is maintained—no careless or haphazard action—creating flow, a rhythm of grace. Such heightened awareness in motion, causes one to live in that moment only, just as not tolerating intrusions leads a person to center. It is the definitive stress-busting routine.

“The idea is to relax muscles, lengthen them and strengthen them,” Berger said. “People feel weight drop off of them, and their presence is lighter.” This leaves a lasting impression creating healthy habits. Berger spoke of a client who was 63 years old, obese and had never exercised. After three sessions, Berger said, “She made a connection to specific parts of her body for the first time.”

Pilates has gained in popularity in recent years because the low-impact workout stresses quality over quantity and is open to all regardless of age or fitness level. Whether someone is recovering from an injury, correcting an imbalance due to posture or repetitive motion or wants to enhance an athletic lifestyle, Pilates offers effective results. Two to four times a week will condition while adding a day or two to an active fitness regime will help isolate and lengthen bound muscle.

“Pilates benefits arthritis sufferers to athletes,” Berger said. “It helps with alignment issues or over-strengthened or over-stretched muscle areas like pectorals and rhomboids to free the chest and shoulders in bicyclists or climbers.”

Before beginning a program of Pilates anywhere, Berger warns client should check the instructor or center’s accreditation. Certification and program requirements can be cross-checked for thoroughness regarding intensive studies, anatomy and more through the Pilates Method Alliance.

Pilates has broad appeal. An injury can be nursed while also strengthening muscle groups that guard against future aches. A senior can exercise for the first time while minimizing strain. An athlete can lengthen bound muscle and anyone can benefit from learning to relax while staying fit.

“People come away energized,” Berger said. “As they find center, relax into it, focus, and then, release, the same things happen in their mind. They breathe better and experience less stress. It’s the gift of being present.” NAMLM   Gail G. Collins