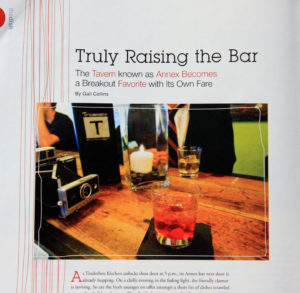 As Tinderbox Kitchen unlocks their door at 5 p.m., its Annex bar next door is already hopping. On a chilly night in the fading light, the friendly clamor is inviting. So are the fresh sausages on offer amongst a short list of dishes scrawled across the chalkboard menu. This glorified waiting room for diners began in 2010, and has grown into a bar in its own right.

Its pretentious trappings – dark leather couches forming a lounge, steel barstools butting an ebony bar and the mirrored wall with liquor on glass shelves – are a front for fun. This poke at chic is revved up by chartreuse walls where classic black and white photography continues the playful wink. A burning match and railroad scenes remind patrons this business on South San Francisco Street lies a block from our own tracks. Outside, the patio is thick with chatter and a life-sized game of Jenga. After dark, an old movie will play on the screen as a backdrop and final, friendly snub at class.

Co-owner and manager Kevin Heinonen said, “Annex is a true cocktail lounge where we give the bartenders license to invent and create. We have fun and keep the Kitchen involved with syrups and purees. The bartenders pick the beers and wines, changing it up, so there’s always something new to try, especially with the cocktail program.”

The drinks special board includes seasonal names like Autumn Harvest and Pompelmo. Some drinks wane with the calendar, and others, when removed, nearly start a riot. Such was the case with the TBox Shandy. The light beer with fresh lemon juice spiked with vodka is a staple now. Other popular beverages are Annex’s Churchill Manhattan, made new with a squeeze of orange bitters and lemon, and White Linen which turns people on to gin. Add elderflower liqueur, lime juice and top with soda to produce a crisp, floral sipper.

We need something to sop up what we tip back, and Annex delivers. Blue plate specials rotate daily with basics like Annex Cheeseburger with Bacon Jam and Peppered Frites, Tuna Melt Sandwich and Chef’s Pasta of the Day, all for $10. “We try and make the dishes best suited for speed without jeopardizing quality,” said Scott Heinonen, co-owner and chef and cousin to Kevin. “It’s pub food, distinct in its own right to the Kitchen. And at $15 maximum price, it’s very approachable.” His bold flavors in simple dishes put a trendy, tasty twist on Mom’s comfort food.

The Chef’s Board is a great way to sample house-cured meats and domestic cheeses on homemade crusts perked up with pickles and chutney. Also try stick-to-the-stomach fare like crispy duck leg and couscous or stay on the lighter side with the TBox simple greens, scattered with candied nuts and dried fruit plus citrus vin. 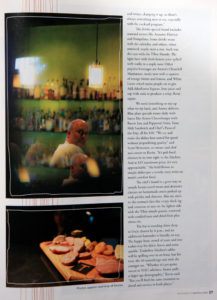 The bar is standing three-deep in lively chatter by 6 p.m., and an additional bartender is literally on tap. The Happy Hour crowd of jeans and tees makes way for skirts, boots and some sparkle. Tinderbox Kitchen’s tables will be spilling over in an hour, but for now, the 40-somethings mix with the younger set. “Whether it’s pre-game soccer or NAU athletics, Annex pulls a larger age demographic,” Kevin says, “but you’ll find the same attention to detail and service in both places.”

Those dining in Tinderbox Kitchen have an array of fine dining choices. Still, if they can’t choose between the roasted pork loin with apple-sage stuffing or bacon-wrapped meatloaf with house mashers, they can always order the $50 tasting menu. An optional wine pairing is available for $25 more. But if you’re looking for a pop in, pop out dining event without commitments, Annex invites you to grab a beer and nosh.

My glass of house red arrives. Tinderbox has begun blending its own wine, and Kevin finds an exciting bit of learning involved in the tasting and test tubes. The idea is to create rotating barrels best suited for the menu. Scott brings out the Boudin Blanc I’d had my eye on since I walked in.

The sliced pork sausages, enriched with milk and egg and seasoned with sage and nutmeg are scattered over mashed potatoes lapping brown butter, topped by apple relish. My inner Brit delights at the bangers and mash. He says, “You don’t have to eat the whole thing.” And I promptly do.  NAMLM  Gail G. Collins

View www.TinderboxKitchen.com for information and menus