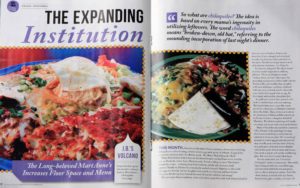 This month, MartAnne’s Breakfast Palace celebrates a dozen years of serving chilaquiles to a salsa-slurping, chorizo-crazed, egg-static group of diehards. A sign at the restaurant’s entrance states the obvious result: The House That Chilaquiles Built.

When MartAnne’s shifted from its downtown location on San Francisco to a nearby spot on Route 66, owner Anne Martinez said, “It took a village to move MartAnne’s around the corner… including help from landlords, family, and of course, loyal patrons.” Family in all forms has consistently worked alongside Martinez as she cracks 432 eggs on a Sunday, but her daughter is her match as a visionary and hard worker. “Tina was the driving force behind the move. It was her ambition and energy.”

The new space flaunts raspberry, ochre and cotton candy blue walls with whimsical palace décor in a riot of feathers, flowers and fiesta fun. It was enlarged and revamped to make way for more tables and items on the menu. But the star recipe remains in all of its glorious variations–los chilaquiles. 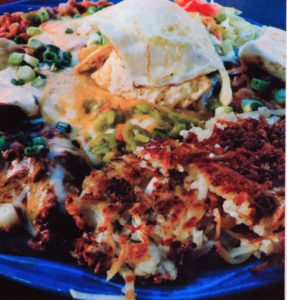 So what are chilaquiles? The idea is based on every mama’s ingenuity in utilizing leftovers. The word chilaquiles means “broken-down, old hat,” referring to the mounding incorporation of last night’s dinner. Traditionally, corn tortilla chips are piled with meat and beans, and then, slathered with any sauce on hand, which softens the mass, before it is topped with an egg. It’s that simple and variable a breakfast dish.

So, pull out a carved chair painted with birds in rainbow hues and start ordering. The handwritten menu reads like a note passed in a classroom as Martinez chitchats about the dishes. Then, sit back and admire the abundance of Mexican folk-inspired art by Emma Gardner, a longtime friend of Martinez. The skeleton paintings will surely encourage you to put some meat on the bones.

Many of the dishes are named for customers. “J.B.’s Volcano” is the pathology of a man who’d eaten everything so many times he asked for it all on one plate. His “everything” amounts to a fried egg precariously perched atop a tortilla peak with lava flows of beans, rice, pork green chile and chorizo flanked with molten pools of sour cream and cheese. One needs a map to sort out the overflowing plate. But why does it matter? Just dig in.

For the undecided, the Christmas Chilaquiles make it unnecessary. The tortilla layer is heaped with two scrambled eggs, and drenched with both red and green sauces, cheese and green onions. And like other choices, is served with rice, beans, hash browns, plus a tortilla, of course. Or go for an omelet, like the Dagwood, a standard Denver-style, which sports a pickle with a side of Fiesta Potatoes. This party of chunky, seasoned homefries is mixed with mushrooms, onions, bell pepper, zucchini, tomatoes, green chiles, cheese and sour cream.

MartAnne’s prides itself on invention, so swapping an ingredient or adding spinach to the Emmett is almost expected. In this experiment, the usual chilaquiles base is topped with grilled Seitan (wheat gluten), tomatoes, green onions and diced green chiles for a messy, marvelous, meatless monster.

To complete the most important, and here impressive, meal of the day, try a glass of fresh O.J. This swallow of sunshine offsets any meal’s spicy heat.

Still, MartAnne’s isn’t just about breakfast. Or even just chilaquiles. An assortment of tacos, enchiladas, tostadas and burritos is available, or just order a bowl of Spicy Green Posole or Texas Red Chile. The menu is evolving with customer whims and input.

MartAnne’s serves stomach-busting portions of cheap eats at $10 or less. And the food is to sigh for. Martinez said, “I’ve served generations of locals … I’m not in it to make a million, but to make a meal people can enjoy as a great experience.”  NAMLM   Gail G. Collins

Visit www.martannes.com or look for the restaurant fan page on Facebook.