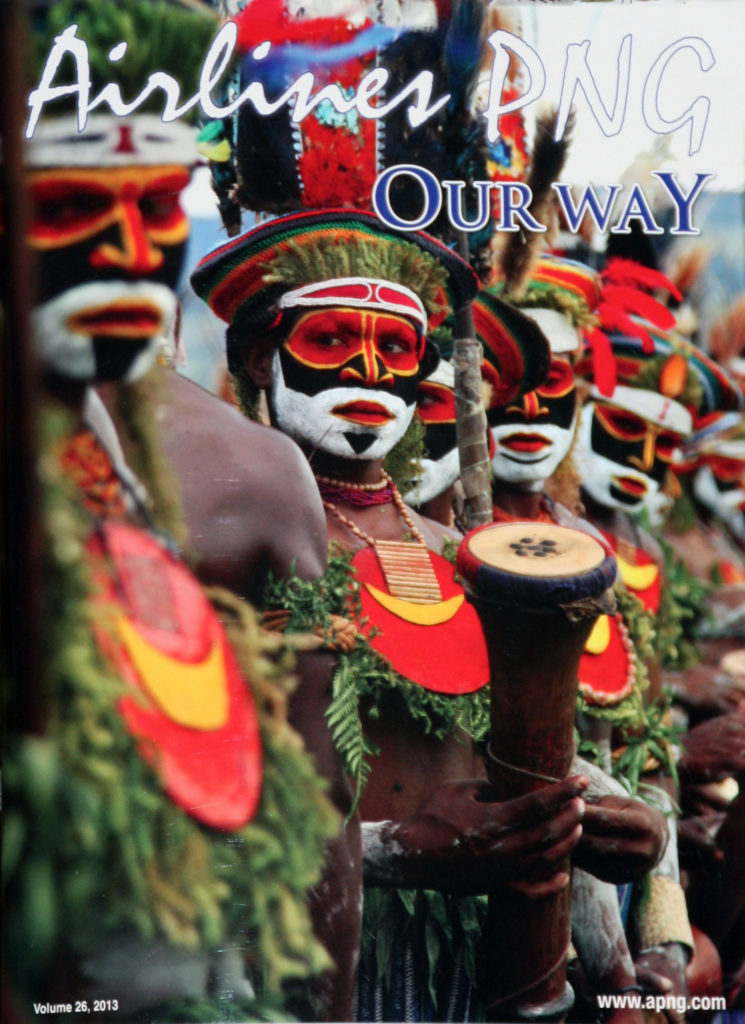 Our adventure was to capture the essence of Papua New Guinea in 200 pages. As we stepped off the plane and onto the tarmac in the Land of the Unexpected, we felt thrilled with the opportunity and aware of the responsibility.

How do you pin down the spirit of a nation, the experience of the expatriate community, the colour of the landscape and the diversity of the personalities while being witty, insightful and entertaining? A daunting task, yet an exciting one.

This project translated into meeting people, both expat and national, travelling to tourist destinations and gathering photos. Each true story and snapshot became a pearl that fashioned PNG Pearls: An Expat Perspective.

Expats and nationals told us of their adventures through interviews, and in all, about 70 contributors made it into the final cut. And to our delight, we experienced a number of them firsthand. Unsure of how locals would respond to being captured on film, we trod carefully but quickly discovered they love to pose and smile. At Port Moresby’s Manu Market, as we snapped images of the fascinating wares, vendors wanted to be included, too. Excitement mounted as people jumped up to crowd into the frame. It was the opposite of being chased by the paparazzi!

The book’s main focus was to serve as a window on the expat world. Most were eager to share their tales. We met a missionary who had been asked by a local to travel to another village. As the men walked, the missionary repeatedly asked the local, “How far?” To which his friend replied, “Not far.” Finally, the missionary asked how long it would take a mother with a baby and a sack of coffee to walk there. When the local said it would take two days, the missionary turned around to get supplies.

People are concerned with safety in an unfamiliar place, especially when headlines shout about trouble. Caution is smart, but Graeme Hunt told us he moved to PNG and locked himself in, fit to defend against an army invasion. No trouble came knocking. As the weeks passed, so did Graeme’s worry, and he fell into such a comfortable rhythm, he often forgot to lock his front door.

Memories make the best souvenirs, but a woman still loves a purse. While bilums of every shade and pattern abound in PNG, Gerry Payne searched for a specific design he had seen in the Highlands for his wife, Brenda. As he approached a vendor, the woman ran away screaming. Stunned, Gerry waited for her to calm down, and then, asked what was wrong. The vendor explained her reaction as embarrassment at being out of wares, and both laughed. Gerry ordered a bilum, and weeks later, the vendor mysteriously appeared with it, surprising the man for a second time.

Although work drives expats to live overseas, leisure activities provide the chance to enjoy a place. A wry Mark Twain once said that golf is a “good walk spoiled.” Nothing could have been farther from the truth, if he had taken that walk around POM Golf Club with four funnymen, as we did. Silliness reigned as the men putted and plodded along. Soon, we scrounged up a score pad, not to jot down the scores, but the jokes, which were clearly linked. The men hit duffs and drives, and close enough was “in” on a putt. This is the indulgence of Big Hole Golf. These witty friends proved golf was incidental to a wonderful walk.

Slightly further afield, Loloata Island Resort is a short car and boat ride from Port Moresby and a popular day trip. Here we took a day off to snorkel the coral reef and lounge on the sand. Despite this, we reverted to plotting and planning the book, and when we tucked in to a lobster lunch, we fell into conversation with scuba pro, Melissa Fuller. Well, it was back to work, interviewing this expert on liveaboard dive adventures. It’s hard to stop a storyteller in pursuit of pearls, even on a tropical island.

Sport fishing is popular. It causes the heart to race and the mouth to salivate, but the actual catch takes time. So it was for Dave de Kretser, who joked with us about the early hours he spent travelling to the river and the hot hours he spent waiting for a bite. Dave finally caught a barramundi, but passed on the offer from local men to fillet it. Once home, he smashed his prized fish into the fridge because he hadn’t the proper knife to prepare it. In the end, he offered it to his local cleaning lady, who later reported on the tasty meal she had cooked for her family. Dave concluded that you could teach a man to fish, and he could eat for a lifetime, but only if he knew how to fillet it.

Weekend jaunts to many seaside cities beckon as PNG’s exotic wilderness boasts paradise where the sand meets the sea. We took a private tour of Rabaul with a local tour guide. Jackson showed us markets where tobacco and taro are sold, plus historical aspects like Japanese barge tunnels and a war museum. Pointing at a battered fighter plane there, Jackson said to us straight-faced, “See the flightless bird.” As we approached, we saw by his smile that his comment was meant for the cassowary beyond the plane.

One can never count on the weather, but one can count on the rain when it’s in season. We met two couples, the Mackays and Bennies, who had traveled to Alotau, only to watch the river and road flood. Undaunted, they finally ventured out, amusing themselves and the locals, who watched them pile into the bed of a truck to cross the deluge. As our storyteller said, “If you go with friends, the rain doesn’t matter.”

Annual cultural festivals provide another incentive to travel. Flamboyant dance exhibitions involving thousands showcase performers costumed with masks, plant materials, pig tusks, shells and paint dyes. Some traditional garb is minimal, as with the Asaro mudmen, who wear terrifying, heavy masks and not much else, except a loincloth. Louise Hutcheson paid a small fee for a photograph with a mudman who reached into this nether region – his only pocket – for change. Louise declined it.

The drama and beauty of the PNG landscape is breathtaking. Literally so in the raw elements of the Owen Stanley Range, where the Kokoda Track challenges trekkers on a sheer, root-tangled trail for 96 km of daredevil drop-offs and perilous peaks. These mountains were the setting for an intense campaign during World War II. Photos pinned on a notice board at the trailhead demonstrated how villagers, dubbed “fuzzy wuzzy angels” for their frizzy hair and fleet-footed assistance on the track, saved soldiers’ lives.

We took a few tentative steps on the slick, steep trail for bragging rights, but our progress was impeded by Jo’s new espadrilles. Her footwear was far from the ideal boots recommended for this demanding hike. She settled for taking photographs near the top while Gail and our host, Louise, feigned exhaustion – hand to head, mouth grimacing – as if they had stumbled from the bush after completing this feat of endurance.

Over 5000 Australians complete the Kokoda Track each year, and we pursued a story from female explorer, Helena Dentrinos. She shared the ups and downs – geographically, emotional and physically – in a diary account of her epic challenge.

In our travels, we met some long-term Australian expats. They shared candid insights, plus memories of colonial days. One drolly remarked, “This place floats on a sea of alcohol.” Our experiences certainly reinforced that observation at interviews and events. We were welcomed with G & Ts at the Yacht Club, champagne at a party, margaritas by the pool and wine in people’s homes. It was a comprehensive in-country sampling of hospitality. Kae Burgess, the Kokoda Trail Hotel’s general manager, contributed black and white photos of Port Moresby from the 1930s. These treasured pearls linked the present and past within the book.

The historical connection to PNG became personal for several expats. They had the opportunity to find links to grandparents or family who were stationed in PNG during World War II. While Mike Goebel was attending a cultural awareness session, he chatted with a local about his uncle’s airplane crash. “Oh, Swamp Ghost?” the local casually asked and related the harrowing tale of an Air Force bomber wreck and rescue of the crew. Some Internet research led Mike to the highly-publicized salvage expedition, performed decades later, and a book whose story expanded on what the man had heard many times from his uncle.

American Repatriation Ceremonies are held when remains, swallowed by the wild terrain, are extracted from crash sites for transport home. JWD attended one of these solemn events during which soldiers are recognized for their service before loading their flag-draped caskets into an enormous military plane to be flown home for proper burial.

Many expats use their skills to contribute to local needs and causes. Women are often nurturers by nature, and Leigh Barnetby donated her time at a local antenatal clinic. There, she did menial tasks, building rapport with mothers as their pregnancies progressed. Leigh admired these mothers 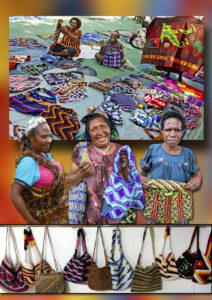 saying, “Everyone else comes first in their lives, their homes often have no running water or power … yet they are still optimistic.” Others also consistently find ways to be kind. One man talked of his sadness for patients at an HIV/AIDs clinic. He visited on Sundays, keeping friendly company and trading oranges he brought along for smiles he kept in his heart.

As we drew together the threads of our experiences in PNG, we identified an overarching theme: the merging of traditions and technology. We interviewed several nationals, and Sisa Kini epitomized this in her mentoring of other young Papua New Guineans to respect what is longstanding and embrace what is new. The changing face of the country is reflected in the eye-catching photo on our book cover of a warrior in full regalia checking his mobile phone. This transition is both the challenge and the opportunity for a country young in its independence, yet ancient in its legacy. 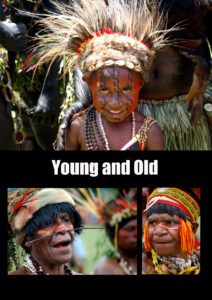 As with our own experience in gathering stories, PNG Pearls introduces readers to strangers who become friends. Anecdotes impart wisdom and often offer a laugh, and in a spectacular photo essay, flashes of paint and the rhythms of a festival shine on the page. As one reader put it, the book is “a visual feast.” We loved creating this string of pearls that encompasses PNG life.