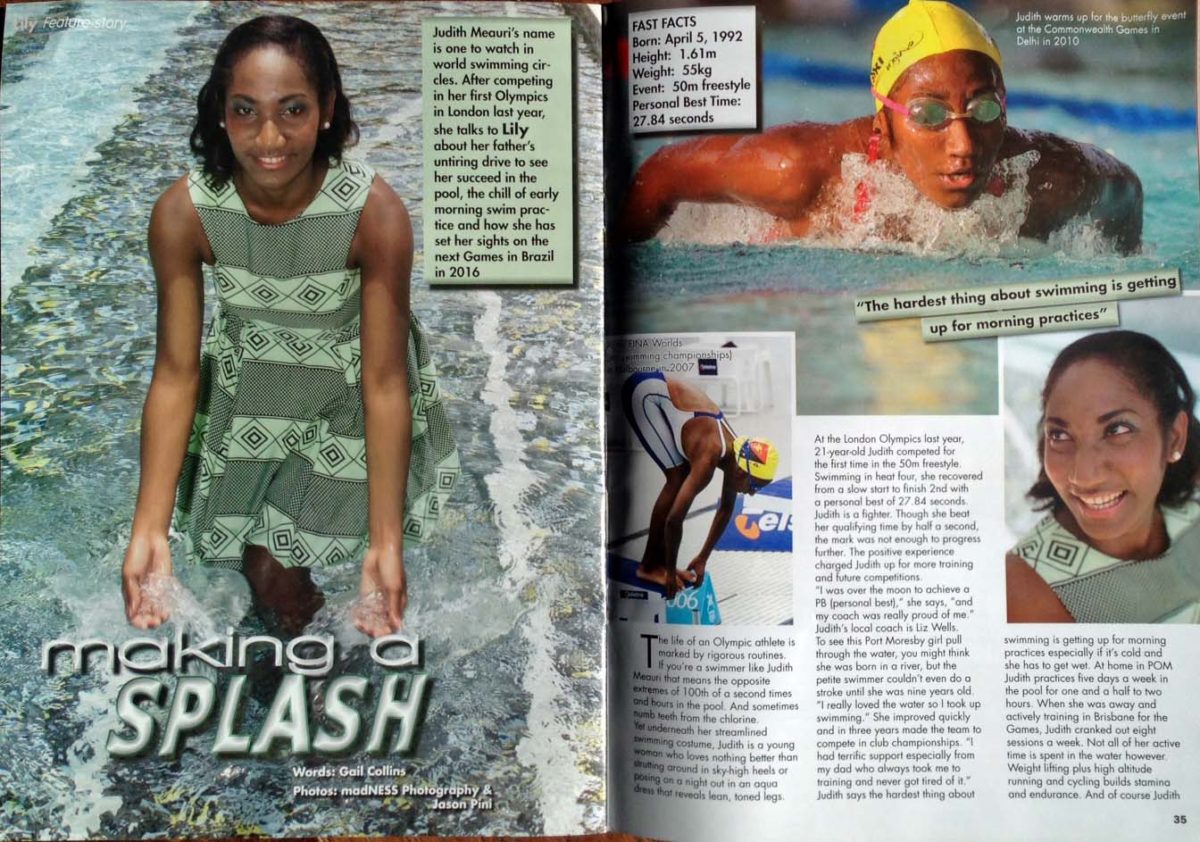 The life of an Olympic athlete is marked by rigorous routines. If you’re a swimmer, like Judith Meauri, that means the opposite extremes of 100th of a second times and hours in the pool. And sometimes numb teeth from the chlorine. Yet underneath her streamlined suit, Judith is a young woman at heart interested in strutting around in sky high heels or posing on a night out in an aqua dress that reveals lean, toned legs.

At the 2012 London Olympics, 21-year- old Judith competed for the first time in the 50m freestyle. Swimming in hear four, she recovered from a slow start to finish 2nd with a personal best of 27.84 seconds. Judith is a fighter. Though she beat her qualifying time by half a second, the mark was not enough to progress further. The positive experience charged Judith up for more training and future competitions.

“I was over the moon to achieve a PB (personal best),” she says, “and my coach was really proud of me.” Judith’s local coach is Liz Wells. To see this Port Moresby gal pull through the water, you might think she was born in a river, but the petite swimmer couldn’t even do a stroke until she was 9 years old. “I really loved the water, so I took up swimming.” She improved quickly, and in three years, made the team to compete in club championships. “I had terrific support, especially from my dad, who always took me to training and never got tired of it.” Judith says the hardest thing about swimming is getting up for morning practices, especially if it’s cold and she has to get wet. At home in POM, Judith practices five days a week in the pool for one and a half to two hours. When she was away and actively training in Brisbane, Australia for the Games, Judith cranked out eight sessions a week. Not all of her active time is spent in the water however. Weight lifting, plus high altitude running and cycling builds stamina and endurance. And of course, Judith watches what she eats. “I make sure it’s the good stuff.”

The success and hard work of PNG swim champion Ryan Pini motivates Judith. His coach accompanied them to London. “Ryan is my inspiration,” Judith says. “He recovered from a shoulder injury and just keeps going.” Pini was the first Papua New Guinean to compete in an Olympic final, representing the country at the 2004 and 2008 Games. He swam the 100m butterfly, his favourite event, in London last year. Judith watched him swim, and Pini watched her touch home.

Going to London was a triumph in Judith’s career, and she breathes a bit harder just remembering. “It was a big thing for me with everyone back home supporting me. It was a good feeling. Seeing all the world class athletes and sharing that moment with them was amazing!” Her family couldn’t make the trip, yet they cheered her on from afar. At the close, the London-based PNG community took their countrymen under their wings and organised a farewell gathering at the High Commission.

Judith has three brothers and a sister, and coming home, her family and friends made it easy to fall back into a routine. After standing on the world stage though, it’s hard not to cause a stir. Some people want to shake her hand. “Walking in Gordons, I can hear people whispering, ‘That’s her,’ but I am not an attention person.” Her voice grows quiet. “I’m not used to that.”

When she can do as she pleases, Judith enjoys listening to reggae and R & B music, with a bit of alternative rock and country thrown in. Her tummy is happiest with a plate of pasta alfredo, and she described the perfect day this way: “I’d take a boat trip up the coastal islands with my family and just chill.” Her life seems to revolve around water, so maybe that is why her favourite color is blue, like the sea. After training in Brisbane, and then, jetting off to the Olympics, Judith is now even farther from home. The National Oceana Olympic Committee researched and awarded a scholarship to Judith to attend and train at Iowa Central Community College in the US. Fellow swimmer Ian Nakmai also attends. The school in Fort Dodge “promotes intellectual discovery, physical development, social and ethical awareness, and economic opportunities for all through an education that transforms lives, strengthens community, and inspires progress.” It means two years of opportunity both in school and the pool for Judith.

Living away from home and training can be hard, but Judith is all in and intends to keep up her busy lifestyle. “Yes, I want to participate in the next Olympics and will definitely continuing training for that,” she declares.