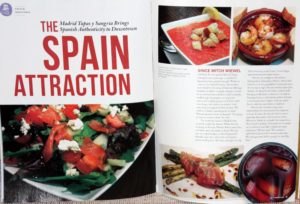 Since Mitch Wiewel and Itzel Arvizu opened Madrid Tapas y Sangria over a year ago, a number of Spaniards have passed through. While en route to the Grand Canyon, the travelers were lured by the menu of familiar offerings: Gambas al ajillo—or garlic shrimp—served in an earthenware ramekin called a cazuela; stuffed piquillo peppers, an imported sweet and slightly piquant chili filled with manchego; and melon con jamón, fresh cantaloupe wrapped in Serrano ham. The caliber of dishes caused guests to insist Wiewel speak to them in Spanish. “I’m going to have to work on that,” he said.

The authentic tastes of Madrid were carefully crafted by Arvizu. While she was studying in Europe, Wiewel flew to meet her, and they spent six weeks in Spain. The pair was on a tight budget, so they frequented friendly tapas bars where the small plates meant small prices. The flavor, though, was big. After returning to the States, Arvizu began experimenting with tapas recipes.

She was no stranger to the kitchen. Hailing from Chihuahua, Mexico, Arvizu had helped out in her grandfather’s restaurant since she was knee-high. She also studied under José Andrés—the Spanish chef often credited with bringing small plates to America—as well as Penelope Casas, a well-known author of books on food and travel in Spain. Like any artist, Arvizu adds her own twists to tradition.

Wiewel also has had a long-term relationship with restaurants from corporate to local. So when the duo decided to open a tapas bar, they took a road trip from Santa Monica to Seattle to consider the competition. They found it lacking. “Our goal was to remain very traditional and offer a legitimate tapas experience,” Wiewel said. “We wanted to uplift the food scene for travelers and locals. We serve gourmet food to people in their flip flops.”

Like any true tapas bars, Madrid is casual and a perfect fit for Flagstaff. But the owners are sticklers for ingredients. “We don’t compromise on product,” Wiewel stressed. This means importing meats and cheeses from Spain. The trademark of Spanish cuisine is jamón. Serrano and Iberico are the traditional country hams of Spain with an earthy, lightly slighted flavor. Iberico ham is a rarity in the U.S., and Madrid orders it by the whole leg and slices it by hand. Charred, crossed spears of asparagus are wrapped in the nutty, buttery meat, which melts in the mouth. For a starter, try the gazpacho. The cold, tomato soup is refreshing with cucumbers and piquillo peppers.

Seafood stars on the menu, too. Garlic shrimp cooks evenly in the cazuela and comes with toasted bread to scoop up the Spanish olive oil and chili flakes. The smoked salmon salad shines with tomatoes, cukes and goat cheese plus a dill dressing. Fried, fresh squid and grilled octopus with potatoes and smoked paprika also bring Spain Stateside. Simplicity is the beauty, and the quality ingredients speak for themselves.

Still, tapas are only half of the bragging rights of Madrid Tapas y Sangria. The signature drink is made with imported Spanish wine, brandy and triple sec plus a boatload of fruit—citrus, cherries and apples—which marinates overnight. Madrid’s sangria is all-natural and made fresh daily with no simple syrups. It offers a strong, but smooth, cocktail. A bubbly alternative is their sangria with Spanish cava. A young Spaniard, however, will likely order a kalimocho, made with equal parts red wine and cola. The wines are Spanish with tempranillo, the backbone of Rioja, and malbec available. So is the top-selling white, blanc pescador, and cresta rosa, a bright, young wine. Both are slightly effervescent and wonderful summer sippers.

Madrid Tapas y Sangria is a small, cozy space that fills up, encouraging strangers to chat and become friends. The chair rail indigo tile plays off the arched Mediterranean mural of a fantasy sand castle by Sky Black. Summertime meet-ups are perfect for the patio. There, feed an adventurous spirit with a dessert of mel i mato, a soft puck of goat cheese surrounded by roasted figs, covered by slivered almonds with a drizzle of wildflower honey. Then, finish the night like the Spanish do with a shot of espresso. Fueled for another round on the town. NAMLM  Gail G. Collins