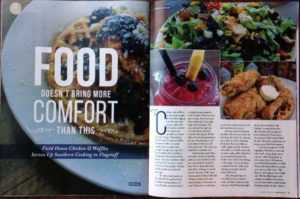 Chicken and waffles is as

American as apple pie. But after digging into this sweet and savory combo, full of Southern comfort and mama, you probably won’t have room for the pie. Nevertheless, Field House Chicken & Waffles Restaurant offers a decadent maple bacon cupcake moist enough to tempt you to go for it. Owners Ryan Field and Brian Terpay opened the down-home eatery—the only “southern-styled, tried and true” in town—across from their other project, Taverna, which opened more than five years ago.

The mesa-like location on Woodlands Village Boulevard is within walking distance of several hotels, and both eateries are highly recommended by staff. Located in Pizza Furiosa’s previous spot, the owners kept what worked well in the light, bright industrial space. The glass wall and front provide a cheerful picnic spot with sunshine streaming in. Trestle tables of mammoth proportion pair up with grassy green and gold-striped booths plus pub seating and more. The mason jars chandeliers are kitschy cool.

Little brother, Jared Field, a Northern Arizona University grad, mans the kitchen and was responsible for luring the team North. They had honed their skills, working in a family friend’s restaurant. Still, when Taverna opened, Ryan Field said, “People wondered if we were crazy bringing a Greek menu to town.” But with its continuing success, the owners aren’t nervous about another niche menu.

Arizona may be Southwest, but that’s still a far ways down the road from the South. So, perhaps, you could use a little educating about food that some folks say could change your life. Chicken and waffles, or C & W, starts with a scratch-made waffle, likely from some wayward Pennsylvania Dutch visitor. Fields isn’t dishing on the recipe. A scoop of butter is smeared over the waffle grid, holding any number of fried pieces of chicken. Pour enough syrup over the piled bird for it to have a swim, and then, shake on some hot sauce. Field House has eight choices from standards, like Tabasco, to regional favorites, like Cholula, and homegrown hottie, Rising Hy. Now, dig in. According to Field, every forkful should contain the combination of sugary, spicy, fried fabulousness.

Let’s hit a couple of C & W highlights. The Bosco is basically half a bird—wing, thigh, breast and leg—which is broasted, as is the entire line of 100-percent natural Red Bird products at Field House. Broasting offers a crunchy crust and succulent meat. “The Bosco is the hangover cure,” said Field. My Boy Blue C & W begins with a blueberry waffle and smothers two chicken tenders under bumpy blueberry syrup and blue cheese—an unexpected surprise.

If you need some greens alongside, or as a meal, the Chicken Feed salad has you covered with romaine and spring mix, plus grapes, bacon, pulled chicken, cherry toms, blue cheese, corn and garlic dressing. It’s hearty and huge. Or get the South in your mouth with an order of fried green tomatoes. Sassy rounds of crackling cornmeal-dusted tomatoes are served with green goddess for dipping.

The Southern burger is a half-pound and hand-patted with a bacon strip cross on a pretzel bun, plus a heap of waffle fries. Besides the usual salad, the burger oozes from a generous swipe of pimento cheese, fried onion strings and jalepeños. The shrimp po’boy is another towering sandwich of stacked, golden-fried, biggie shrimp and salad toppings on a hoagie. This buddies up well with bacon mac’ and cheese—smoky, creamy, mature pasta curls.

This kind of spread needs some moonshine for sippin’. Field House makes it with fresh lemonade and muddled berries. Or try one of their signature bloody cocktails. #bestbloodyinflag is a meal in a mason jar with the standard stuff and spice, plus a spear of bacon-wrapped jalapeño, cheese and stuffed olive. For many, there is nothing like a beer with fried chicken, so keep it simple with a Pabst tallboy, served in a paper bag to keep your greasy mitts from dropping it.

Breakfast is served all day, and the hours at Field House have the bar change crowd covered for fast, remarkable food. “The weekends get cozy for brunch,” Field said. The median price of an entrée is $12. As the rooster on their sign indicates, Field House Chicken & Waffles is something to crow about.