After losing her son in a tragic car crash in 2006, Katy mom Carol Levin is on a mission to end drunk driving 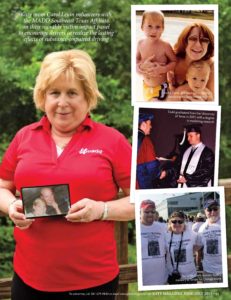 “It’s as bad you think it is,” Carol Levin says, describing the loss of her son to a drunk driver, “but he was an amazing person, and we’ll live his life in the best way we can—we need that.” It’s why Levin got involved with Mothers Against Drunk Driving® (MADD).

Todd Levin was 28 years old and was planning on proposing to his girlfriend Ralynne Healey soon. The couple was returning from a sports activity and dinner out. Todd never drove under the influence, and Healey was training for the Olympics as a figure skater and didn’t drink at all. On September 25, 2006 at 10 p.m., a drunk driver shot through a red light at 85 mph in a 35 mph zone. The impact was severe. Suffering two skull fractures and a crushed chest, Todd was killed instantly. Healey died on the way to Ben Taub Hospital. The driver was nearly twice the legal limit and didn’t stop to render aid. END_OF_DOCUMENT_TOKEN_TO_BE_REPLACED

Fourteen-year veteran Principal Martha Strother inspires her students to “do whatever it takes” to overcome the odds and graduate. The kids sport wristbands with the motto, reminding them to be victorious over difficulties.

Superintendent of Schools Rick Berry’s vision for Windfern High School of Choice (WHS) grew from his son’s lackluster performance in a typical, massive high school. In 1995, WHS opened in a re-purposed administration center as a small campus school for juniors and seniors with limited class sizes and individualized education. The school is designed for, “bright, able children, whose native intelligence isn’t showing up in standard settings,” Strother says. END_OF_DOCUMENT_TOKEN_TO_BE_REPLACED