Kicks on Route 66 Breaks Conventions and Elevates Dining in Williams 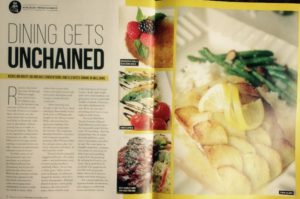 Regulars who travel Interstate 40 through Williams might have noticed that the highway sign for the decades-long mainstay of Denny’s on the west side of town is no longer there. As it turns out, the chain eatery had transformed into Kicks on Route 66, with such an abundance of fresh, inviting fare as to make it a dining destination. That is the secret ingredient independent restaurants can offer—choice. Often, local sourcing, scratch cooking or seasonal menus can offer customers an adventurous culinary reason to return.

In 2010, seven out of ten restaurants were one-unit shops, according to the National Restaurant Association, but 60-percent fail in the first three years. With the flat economy recently, chains have claimed nearly two-thirds of foodservice visits, encouraging many independents owners to make the switch to chains. Still, where there is great risk, there is also great reward with personality and higher profit margins outside franchise constraints.

Local restaurant operators may lack the power of marketing and money that chains with corporate ties have, but they can make it up with service that builds special relationships. Keeping track of birthdays, offering redeemable rewards, gift certificates, feedback cards, unique décor and wider menu options are some of the many suggestions listed at RestaurantOwner.com, a service that binds independent owners to give them an edge over chains.

After more than two decades in the Air Force, Brad and Sally Olson finally circled home to Williams and bought out the Denny’s owner. With a 28-year franchise agreement expiring, they decided turn independent last summer. The couple has abundant franchise experience with composite properties claiming a Best Western, Days Inn and gas station, plus two chain restaurants elsewhere. So why buck the trend?

“Denny’s food is prepared, bagged and frozen—it’s cookie-cutter—and performance-wise, it wasn’t going anywhere,” said Sally Olson. “It was time to shift gears.” After several years in Europe, its influences shaped the foodies’ menu for a diverse demographic. Manager David Anderson courts group business, like international tours, which schedule stops at the Gateway to the Grand Canyon. Kicks’ light, bright space with nickel hardware and grass green accents comfortably handles a busload of Germans one night and Japanese the next. Kicks also provides a nourishing, local lunch or nice night out with clients.

Executive Chef Steve Tennal, formerly of Beaver Street Brewery, pooled talent for a successful scratch kitchen team. “It’s humbling—learning and growing—but no matter the work and hours, a great crew is what makes it possible,” he said. The cooks thrive on friendly competition, outdoing one another at concocting the daily soups and assembling recipes from the ground up. By utilizing local sources and meats, like ground bison for meatballs with spaghetti and beef filet with gorgonzola butter, they proved there is a market enticed by wild game.

For appetizers, the kickers are enormous, spicy jalapenos stuffed with cream and cheddar cheeses, wrapped in a double layer of smoky bacon and drizzled with Arizona prickly pear sauce. The tomato caprese is classy, featuring tomatoes roasted on the vine, sweet basil nestled with golden beets, fresh mozzarella and finished with extra virgin olive oil and balsamic glaze.

The desserts are creative classics. The tart white chocolate key lime pie gains its luscious viscosity from the high cocoa content and hugs a graham cracker crust, all under a cloud of vanilla bean whipped cream in raspberry sauce. The crisp, caramelized sugar of the Madagascar vanilla bean crème brulee cracks indulgently to expose baked custard. Enjoy it with a scattering of fresh berries.

Whether it is Fish Fry Friday, Margarita Monday, Sunday Brunch or a host of appetizers with friends to watch the big game, Kicks appeals to tourists and residents while complimenting the hotel properties. “Some folks were frustrated by the change,” said Brad Olson, “but people have warmed up to the idea as we reached out to them with events, parties and NFL Sunday Ticket.” That’s how the independent operators do it—choice and welcoming service. NAMLM   Gail G. Collins