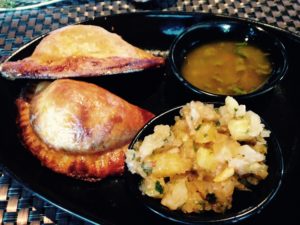 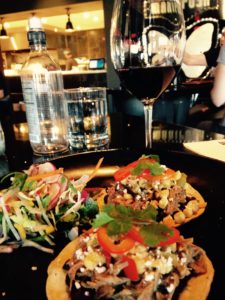 Preparation relies heavily on stewing and marinating. Popular ceviche employs marinated raw fish in lime juice, an acid which “cooks” the protein. Meats are stewed with potatoes or yucca, tomatoes and peppers, along with various seasonings: oregano, garlic, chili, cumin and cilantro. Generally, dishes are spicy, but that doesn’t always translate as hot. Grinding and grating are typical techniques for infusion. Dried herbs and seeds add nuance and depth of flavor to sauces, soups and pastes. Condiments, blended from fresh ingredients and spices, range from salsa and mole to chimichurri and aji, a piquant pepper sauce. Sofrito combines tomatoes, roasted peppers, onions, garlic and herbs as the foundation for Latin dishes.

Despite ubiquitous Mexican meals, consumers with savvy palettes and a taste for ethnic diversity pursued Latin American cuisine as the hot trend for 2014. Whether it is traditional cooking methods, such as the parilla or wood-fired grill, or new textures, like nutty quinoa, diners were piqued. Enter Mariposa Latin Inspired Grill. On a hillside in Sedona, with an expansive patio and fire pit overlooking Red Rock Country, the sunsets aren’t the only thing offering a fiery display. The menu tempts with Executive Chef Lisa Dahl’s inspiration gathered on a trip to South America. Her guided venture stretched from such viticulture destinations as Mendoza to the kitchens of traditional family establishments and even Argentina’s celebrity chef, Francis Mallmann’s El Garzon to confirm her restaurant’s cuisine.

Mariposa captures that Latin experience with massive beams and oxidized metal features, forging a masculine abode tempered by the transformational butterfly, its Spanish namesake. Hues and materials nestle Mariposa amongst the landscape, while the crafts of 15 artisans set it apart, showcasing metal sculptures, wall décor and an 800-pound rock door. Dahl replicated the raw fire of a parilla alongside a wood-fired oven within a 25-foot exhibition kitchen in tandem with black leather, stone and nickel detailing to build an upscale, yet warmly inviting, atmosphere. The chef is self-taught—an avid cook seasoned from two decades crafting “Mediterranean soul food.” Mariposa is the fourth restaurant in Dahl’s group, following the 20-year success of Dahl and Di Luca Ristorante, plus Cucina Rustica and Pisa Lisa Pizzeria. 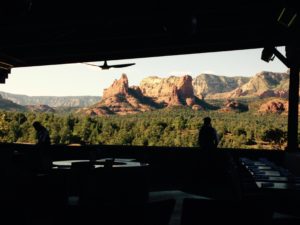 Ease into the Latin experience with Mariposa’s Gaucho Hour. Guests pack a patio from 4 to 5 p.m. to sip a Chilean red or a cocktail with an Argentinean twist and nibble tapas while awaiting the sunset show. “It’s a primitive, rustic-styled menu,” said Dahl, “with earthy flavors, celebrating the heartland of cuisine.” She interprets flavor profiles in authentic dishes, tying together her past with the present place and Latin people, utilizing a staple, like corn.

The Ecuadoran ceviche infuses Gulf shrimp with tomatoes, citrus and chilies promoting such freshness that Dahl said, “You can’t stop eating it.” Popcorn, tinged with truffle oil and cayenne, served alongside plays up the bright dish with crunchy heat. Flaky, golden empanadas filled with chorizo and potato pick up zing with pineapple criolla and house chimichurri, a trademark blend of parsley, garlic, oregano, vinegar and chili. Pulled pork, marinated and slow roasted for a sensuous mouth, sits atop black beans on a tostada with roasted corn and cotija, heavily scented with pineapple tomatillo and cumin. It’s decadent street food.

For a mainstay, the seared and grilled beef filet, coated with chimichurri, nudges under the knife, yielding perfect pink. A pool of crema with chipotle adds ardent complexity. Pork and veal chops plus marinated chicken offer worthy alternatives. Try the gazpacho, a bowl of cherry lively that Dahl claimed, “dances in your mouth.” A side of yucca fries—sturdy planks for dipping into chili aioli or chimichurri—completes a hearty meal. Dessert is a short, sweet list including boca de muerto, a flourless chocolate cake with fresh berries on a salted caramel swirl, plus a scoop of heavenly dulce de leche gelato.

The wine list finds a home in South America, leaning on Chile and 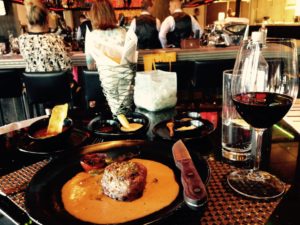 Argentina, but honoring France and Italy as well as local bottles. The house rec’s pair well and expertise behind the bar is ready to assist guests. A regular diner came in for a Chopin martini and a steak, like an Argentinian ordering at his neighborhood parilla. “This is the only good steak place in Sedona—it’s comparable to Scottsdale,” he said. So, no need to travel south for inspirational cuisine, unless you want to book a flight to South America. NAMLM