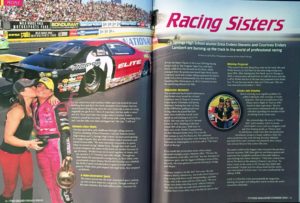 Cy-Fair sisters Erica and Courtney Enders grew up around the track watching their dad drive. Pro Stock champion Erica Enders-Stevens started Junior Drag Racing when she was 8 years old, a class of racing originally geared for 8 to 17-year-olds. Now, 25 years later, she has made a career out of it. Three years after Erica, younger sister, Courtney, joined the race team. “I fell in love with racing watching Erica, and I was her little crew chief and biggest fan,” she says. “I still am.”

The duo spent their early childhoods through college years in Cypress, attending Wilson Elementary, Watkins Junior High and Cy Springs High School. As teens participating in a range of sports, they also held student council positions and joined various clubs. “We were extremely competitive in sports when we weren’t racing,” admits Erica. Though they both raced as junior dragsters, the sisters rarely faced one another because of age divisions. “We like to say we’ve raced together six times, and our record is 3-3,” Courtney says with a laugh. Throughout, their family life maintained a racing focus, as their father even coordinated a trip to Disney World with Florida’s race schedule. The thrill of speed and adrenalin in general fueled their passion. While other girls stepped into high heels, they strapped on helmets.

The sisters moved into the male-dominated sport, racking up wins in their respective categories. Though working in the same industry, they held different jobs. Courtney has driven the Super Classes of the Lucas Oil Drag Racing Series, such as Top Dragster, Super Gas and Super Stock, while Erica has focused on Pro Stock, which emerged from the production-based Super Stock classes. Courtney raced and worked selling equipment for Sparco, while Erica drove professionally for a few teams before founding Elite Motorsports. In 2013, Courtney became marketing director for Elite.

The scoreboard has boasted milestones as they broke every record for a female. Courtney won in Texas in Division 4, Cajun Sports Nationals and Spring Nationals, besting her sister as King of the Hill before pulling back from racing when she joined the Elite team. Erica holds the overall world speed record clocking in at 215.55 m.p.h. She won nine out of 24 national events in 2015, finishing in the final round 50% of the time. With back-to-back wins in the World Championships on their Houston home track, Erica was the first woman to win Pro Stock, too. Still, this success overshadowed gender she she won the 2015 U.S. Nationals in Indianapolis, or as Erica calls it, “The Super Bowl of Racing.”

Erica credits her tremendous team, whose unique personal triumphs create a dynamic effect. “We have the same passion, work ethic, and faith,” she says. Racing is an expensive sport, and the biggest challenge is sponsorship. Recently, the team garnered corporate backing by Dodge and Mopar.

“I always wanted to be like Dad,” Erica says. She also admires Shirley Muldowney, who broke down barriers in drag racing with three world championships, and John Force, who is the name and face of the sport. “We were always two sister who drag-raced,” reflects Courtney. “But now, our roles are more team-oriented, and I wouldn’t have it any other way, or do this for anyone else.”

Titles weren’t the only thing Erica won on the track. She and Richie Stevens, Jr. had been on the same drag racing team since 2006. After winning the Pro Stock race in Chicago in 2012, a veteran racer advised Erica to walk the track and take it all in. Richie met her in the lane and proposed at the finish line. “It was the most perfect day ever,” Erica says. The two were married on December 7, 2012.

Sisters winning races together grabbed the public’s attention with coverage in People Magazine. This led to production of the Disney movie Right on Track in 2003 based on their experience. The five-year project culminated with the high schoolers spending two months on the set during Erica’s senior year.

She acknowledges the story is “Disney-fied,” and Courtney refers to events which didn’t occur, such as a dragster crash and their butting heads, as “Disney dust,” to add drama. Moreover, the production introduced racing to a larger audience while the sisters performed the stunt driving. Beverley Mitchell portrayed Erica and Courtney was played by Brie Larson, who won an Oscar as Best Actress this year.

The sisters could not be happier that everyone’s early dreams have become successes. Still, these gals are not drama queens and generally appreciated the straightforwardness of the male industry, experiencing only minor disrespect. “Only four women have driven Pro Stock in the industry’s history,” says Erica, “so when I came on the scene at 19, I’m sure they didn’t take me seriously.” People were not always kind, but the sisters were determined. As Erica says, “Let your scoreboard do the talking.” CFM

After three books and writing internationally for magazines, Gail G. Collins feels writing is the best excuse anywhere to know others better.