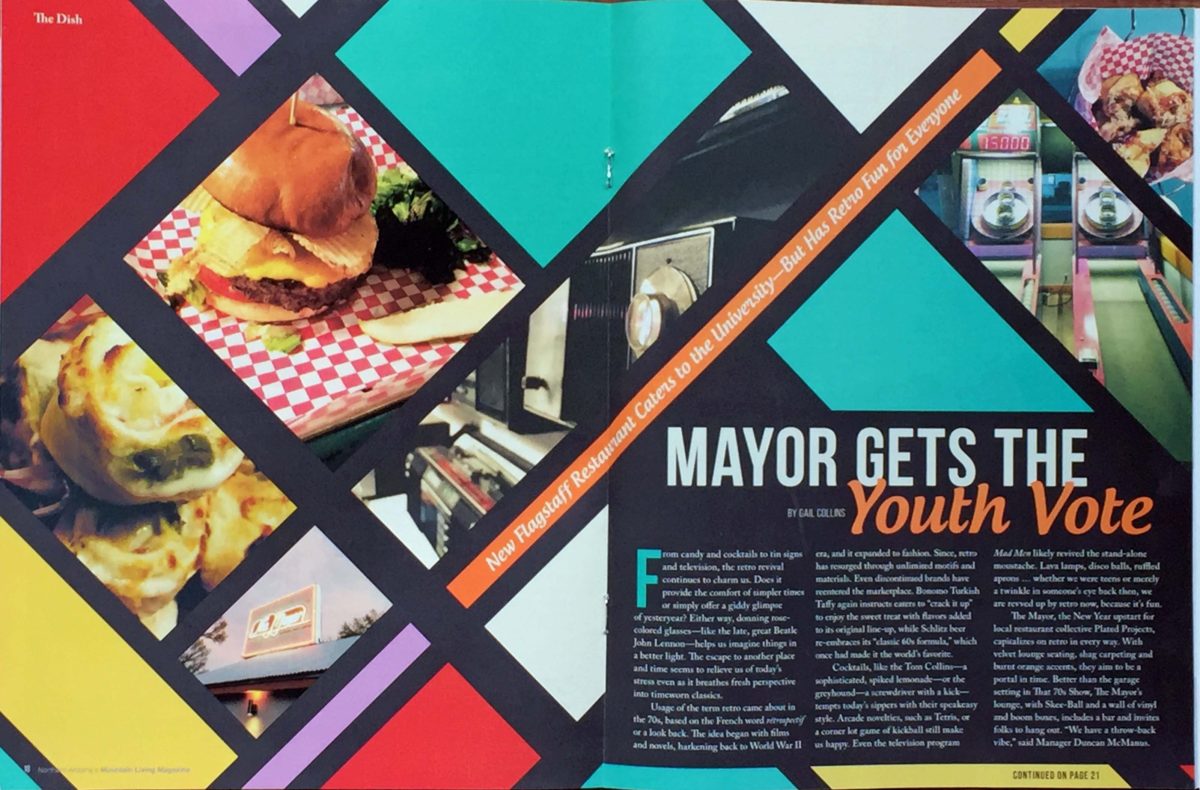 From candy and cocktails to tin signs and television, the retro revival continues to charm us. Does it provide the comfort of simpler times or simply offer a giddy glimpse of yesteryear? Either way, donning rose-colored glasses—like the late, great Beatle John Lennon—helps us imagine things in a better light. The escape to another place and time seems to relieve us of today’s stress even as it breathes fresh perspective into timeworn classics.

Usage of the term retro came about in the 70’s, based on the French word rétrospectif or a look back. The idea began with films and novels, harkening back to World War II era, and it expanded to fashion. Since, retro has resurged through unlimited motifs and materials. Even discontinued brands have reentered the marketplace. Bonomo Turkish Taffy again instructs eaters to “crack it up” to enjoy the sweet treat with flavors added to its original line-up, while Schlitz beer re-embraces its “classic 60’s formula,” which once had made it the world’s favorite.

Cocktails, like the Tom Collins—a sophisticated, spiked lemonade—or the greyhound—a screwdriver with a kick—tempts today’s sippers with their speakeasy style. Arcade novelties, such as Tetris, or a corner lot game of kickball still make us happy. Even the television program Mad Men likely revived the stand-alone moustache. Lava lamps, disco balls, ruffled aprons … whether we were teens or merely a twinkle in someone’s eye back then, we are revved up by retro now, because it’s fun.

The Mayor, the New Year upstart for Plated Projects, capitalizes on retro in every way. With velvet lounge seating, shag carpeting and burnt orange accents, they aim to be a portal in time. Better than the garage setting in That 70’s Show, The Mayor’s lounge, with Skee-Ball and a wall of vinyl and boom boxes, includes a bar and invites folks to hang out. “We have a throw-back vibe,” said Manager Duncan McManus. The Mayor is situated in the previous, longtime El Charro Café location. As McManus pointed out, “We’re the first and last stop for NAU campus, and the step-back-in-time spot for themed retirement or birthday parties. The nostalgia works are for all ages.”

In the enormous patio area, an elliptical, silver Airstream stands as the muse. “The retro concept spun out from the Land Yacht fun bar,” he said. Taps, handles and liquor outfit the converted trailer turned tavern. Beyond, strung with bulbs for all-night appeal, the living yard of couches offers unlimited sprawl space. Come in for the Happy Hour $8 burger and beer, but linger for a round including cornhole or large-scale Jenga.

To sop up the sipping, Jared Field, a project partner and the establishment’s executive chef, keeps the pub-grub good. Snacking among friends is easy with pizza roll-ups.  A standard pie is rolled and sliced for handholds of cheese and pepperoni to smother in extra sauce. Wedge fry nachos shame chips with a base of chunky potatoes. These are seasoned before and after frying, and then, bathed in sour cream, guacamole and jalapeños plus a sidecar of beer cheese sauce.

The Land Yacht does its namesake proud—a behemoth burger with cheese, greens, tomato and hand-cut waffle potato chips within a griddled bun and a pickle spear. The sloppy Josephine with turkey and the Jenny, a quinoa burger, provide no-bull options.

Relive school days from 11 a.m. to 3 p.m. with a cafeteria lunch served on a vibrant, nostalgic tray, so nothing touches. Half a sandwich, wedge fries, salad, and of course, a rice krispie treat create the lunch we once loved.

Everyone has dreams, and at The Mayor, you can run for office. Based on social media and revenue, the elected Mayor for a Month chooses a handle, a sandwich and celebrates with a gratis party for 10.

The Mayor keeps each day interesting with an event, a drink and a food special. For example, Monday is Movie Night with boxed meals, beer and popcorn; Tuesday is Trivia Night; and Trailer Park Night offers homage to High Life beer. It’s a portal in time where people can meet today. As MacManus said, “Jet by, grab some food, enjoy and go.” NAMLM