“If we build it, the memorabilia will come to fill it,” Jerry Waxman says of the Katy Veterans Memorial Museum. As a member of VFW Post 9182, Waxman had a vision to honor American veterans and preserve any and all items related to their service. The G.I. Joe style military museum resulted, housing artifacts temporarily loaned or bequeathed to the museum.

Born in 1925, Waxman grew up fast and joined the fight to protect the U.S. after the bombing of Pearl Harbor. He marched to the recruiting office, passed the tests, and he was in. With his ability to play a few instruments, the recruit discovered it was the Marine Corps band, not the war, he was in. He declined, aiming to fight the Nazis. Waxman was told, “You’re a Marine, and we’re not fighting the Nazis; we’re in Asia fighting the Japanese.”

Next, Waxman boarded ship, headed to Asia, where first-time crossers, called pollywogs, were hazed on occasion. Finally in Asia and ready to fight, Waxman was plucked from the ship and ferried to Pago Pago, American Samoa to finish a mural in the Officers’ Mess. Once aboard ship again, Waxman was surely bound for war. “Nope,” he says with a laugh, “this time I was sent for training in Oregon and worked on the camp newspaper.” After that, Waxman arrived in Quantico, Virginia, where part of his artistic project entailed burning script. He worked on a table protected with butcher paper. Beneath it was a map, outlining possible strategic war plans, which the charring process destroyed. “Fortunately, it wasn’t needed,” he says.

END_OF_DOCUMENT_TOKEN_TO_BE_REPLACED

Some of the Best of Our Local Dishes 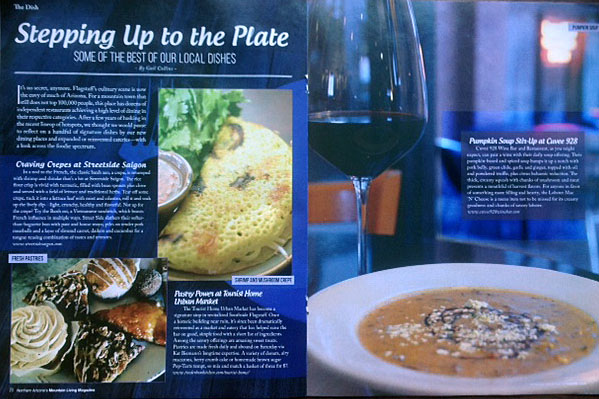 It’s no secret anymore. Flagstaff’s culinary scene is now the envy of much of Arizona. For a mountain town that still does not top 100,000 people, this place has dozens of independent restaurants achieving a high level of dining in their respective categories. After a few years of basking in the recent lineup of hotspots, we thought we would pause to reflect on a handful of signature dishes by our new dining places and expanded or reinvented eateries with a look across the foodie spectrum. 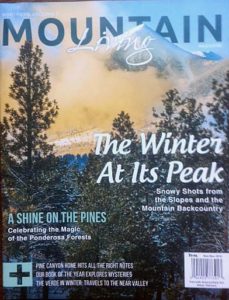 In a nod to the French, the classic banh xeo, a crepe, is revamped with shrimp and shitake, that’s a hit at Streetside Saigon. The rice flour crisp is vivid with turmeric, filled with bean sprouts plus chive and served with a field of lettuce and traditional herbs. Tear off some crepe, tuck it into a lettuce leaf with mint and cilantro, roll it and soak up the lively dip—light, crunchy, healthy and flavorful. Not up for the crepe? Try the banh mi, a Vietnamese sandwich, which boasts French influence in multiple ways. Streetside slathers their softer-than-baguette bun with pate and hose mayo, piles on tender pork meatballs and a layer of livered carrot, daikon and cucumber for a tongue-teasing combination of tastes and textures. streetsidesaigon.com