Katy kitchens boast many culinary wizards, who’ve honed their passions for flavor and flair to create success on a plate. 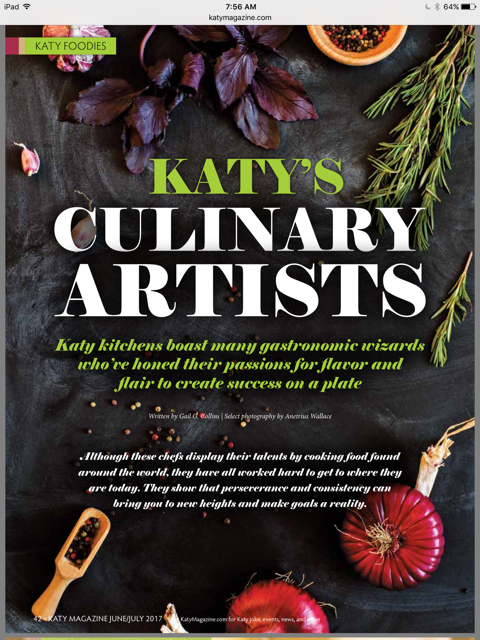 Although these chefs display their talents by cooking food found around the world, they have all worked hard to get to where they are today. They show that perseverance and consistency can bring you to new heights and make goals a reality.

With 5 siblings, cooking was simply part of Eric Aldis’ family chores. “I 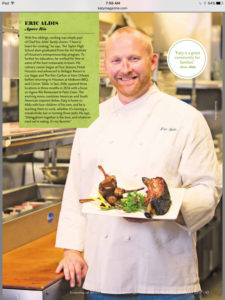 have a heart for cooking,” he says.  The Katy Taylor alum graduated from the Art Institute of Houston’s entrepreneurship program. To further his education, Aldis worked gratis for some of the best restaurants in town. His culinary career began at Four Seasons Hotel Houston and advanced to the Bellagio Resort in Las Vegas and the Ritz-Carlton in New Orleans before returning to Houston at Midtown BBQ and Corner Table. In fact, Aldis opened three locations in three months in 2016 with a focus on Agave Rio Restaurant & Patio Oasis. The evolving menu combines American and South American-inspired dishes. Katy is home again to Aldis with four children of his own, and he is teaching them to work, whether it’s running a nonalcoholic bar or turning those pots. He says, “Sitting down together is the best, and whatever meal were eating, it’s my favorite.”

It’s hardly surprising that Chef Christo Batsios would own and operate an Italian restaurant with his father Georgio. As a Greek-Italian immigrant, Georgio owned three restaurants in Michigan, where Chef Christo grew up. Generations before him had run restaurants, and at 4 years old, Batsios sat on a milk crate peeling potatoes and onions. After a culinary education and work in Italy and Greece, Batsios joined HEB to butcher and progressed with the company. His dreams soon turned to longing for a restaurant, and Georgio emerged from retirement with Landry’s. An Italian brasserie with a struggling menu was found and infused with legacy recipes, like Pomodoro sauce and slow-roasted beets with lamb shanks. “I love to feed people, and every guest is coming to our home for dinner,” Batsios says. His goal is overachieving in flavor—sapore—with service and presentation of rustic dishes dressed in signature sauces. Getting up before dawn and prepping is a joy. The journey from his humble roots to technical cooking skills is satisfying, and new wife Cassie supports his passion. 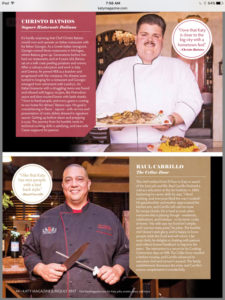 This chef trekked from El Paso to Katy in the search of the best job and life. Raul Carrillo finalized a culinary education at the Art Institute in 2004.  Explaining his career shift, he says, “I liked cooking, and everyone like the way I cooked.” His grandmother and mother appreciated the kitchen arts, and Carrillo still calls his mom for recipe checks. He is hard at work when everyone else is playing though—weekends, celebrations, and holidays—so he never cooks at home. “My wife says my food isn’t simple, and I use too many pans,” he jokes. The humble chef doesn’t seek glory, and is happy to know people relish the food and will return. Like most chefs, he delights in chatting with patrons and collects honest feedback to improve the menu. The interaction is a return to his Cooking Connection days at HEB. Perhaps, that is the secret to recent success all around. The Cellar Door needed a kitchen revamp, and Chef Raul advanced to executive chef and turned it around. The family establishment showcases the wine, and Carrillo’s cuisine compliments it wonderfully. 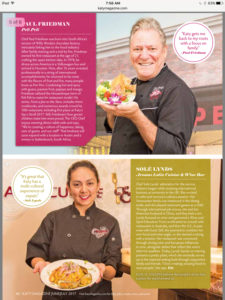 Paul Friedman was born into South Africa’s version of Willy Wonka’s chocolate factory, inextricably linking him to the food industry. After family training and a trial by fire, Friedman owned his first restaurant at the age of 21, crafting the open kitchen idea. In 1978, he drove across America in a Volkswagen bus and arrived in Houston. Now, after 35 years invested professionally in a string of international accomplishments, he returned to his roots with the flavors of fruit and fire, many people know as Peri Peri. Combining hot and spicy with guava, passion fruit, papaya and mango, Friedman utilized the Mozambique term of Peli Peli to name his restaurant model. His series, From a Jew to the Stew, includes three cookbooks, and numerous awards crowd his 58th restaurant, including first place at Katy’s Sip and Stroll 2017. Still, Friedman’s four grown children make him most proud. The CEO Chef enjoys meeting diners table-side and says, “We’re creating a culture of happiness, taking care of guests and our staff.” That kindness will soon expand with a location in Austin and a winery in Stellenbosch, South Africa.

Chef Solé Lynds’ admiration for the service industry began while studying international business at university in the UK. She worked in cafés and revived a culinary passion. Her Venezuelan family was immersed in the dining trade, and she played restaurant games as a child. Through international job moves, she met her American husband in China, and they had a son. Lynds focused on wine and garnered a Wine and Spirit Education Trust certification to consult with restaurants in Australia, and then the US, to pair wine with food. Still, she yearned to combine her own food and wine angle, so started cooking with a mission. Her restaurant was conceived with strong Latin and European influences in wine, alongside dishes that reflect a wine’s inherent qualities. Today, Lynds’ hands-on training presents a pretty plate, which she excitedly serves up in the inspired setting built through supportive family and friends. “I love creating amazing food to wow people,” she says. KM

Working out as a couple offers time together, accountability, and ultimately, success for these dynamic duos. Four couples share their motivation and advice on how to get fit and stay fit, despite demanding careers, kids’ activities and life’s obstacles. They have found fitness maintains the best quality of life.

In 2015, when Jeremy and Clarissa Browning took a hard look at themselves, they saw the exact opposite of everything they used to be. Jeremy had played college baseball and coached, while Clarissa once danced ballet. “We were lethargic, restless, and fueling our bodies poorly, which affected our physical, mental, spiritual, and emotional selves,” says Jeremy. The couple vowed to become their best and healthiest selves.

That commitment led them to investment in six Iron Tribe Fitness franchises, stressing proper nutrition and intelligent fitness for sustainable change. High intensity interval training provides them with a safe, fast-paced, varied workout. While coaching others, Jeremy lost 43 pounds, and Clarissa regained her strength with optimal body fat composition, even after pregnancy. They find inspiration in wanting to share a long life with their son, Boston. “We both feel it is a sign of gratefulness and self-respect to eat clean and workout consistently,” says Clarissa.

A Healthier and Happier Couple

Consumed with life after the birth of her twins, Meagan stopped exercising. Despite having been a collegiate athlete, she panted her way up the stairs. When the children headed to kindergarten, she found a nearby gym and no more excuses. Matt had consistently worked out at home, but they joined as a family pledge. Now, they crave the workouts, scheduling partner sessions as friendly competition when possible. “It’s one hour we can have that’s just for us,” says Matt, and it fuels other areas of their busy lives.

The couple has gained lean muscle mass and improved their eating habits, yet find balance—no Cheetos, but a nice glass of wine. Accountability is vital and goal-setting—like finishing a quarter-marathon for Meagan and more energy for Matt’s demanding job—drives them. “We are a healthier couple, but also a happier couple,” she says.

Staying Healthy for their Children

David and Kristen Hewitt lost their fathers when the men were in their 50’s. The couple needed to stay healthy for their children, so they joined a gym. Classes with cardio and strength components that change and challenge them, while emphasizing form and mechanics, are their favorite. These include modifications for Dave—who lost his leg below the knee in a motorcycle accident followed by knee and hip surgery—to expand his mobility and technique. This improved Dave’s gait with a prosthetic limb and lessened his medications. In the past seven months, he lost 25 pounds, and Kristen traded in 20 pounds for a leaner body and ramped up muscle. Big changes in food and family activity accompanied their fitness regime. “Eighty percent of it is diet—make small changes that stick,” says David. Kristen adds, “We have more energy, we are sleeping better, and just feel better overall.” Accountability and togetherness assured their success.

Building Friendships and a Healthy Lifestyle

Chad and Brittani Morales are fitness coaches and compete in Crossfit competitions, but they face the same obstacles to a healthy lifestyle as everyone else. “You can’t out-work a bad diet,” says Brittani. “To see results, you have to make some sacrifices, have a plan, and stick with it.” Weekly, she organizes meals ahead to avoid inevitable time-crunches.

Working out has been part of their relationship from the get-go, building more togetherness. They enjoy partner or team workouts and chippers, which link several series of timed movements. “We both have the same goal to be healthy, but working out as a couple also allows us to motivate and push each other,” says Chad. Through their Crossfit competitions, they have created lasting friendships in the community, too. As coaches, they have applauded the inspiring and difficult journeys people have made to regain health. Overall, fitness maintains the best quality of life. KM

Bio: Gail G. Collins writes for magazines, has authored three books on life abroad and believes meeting people is the best way to understand the world. 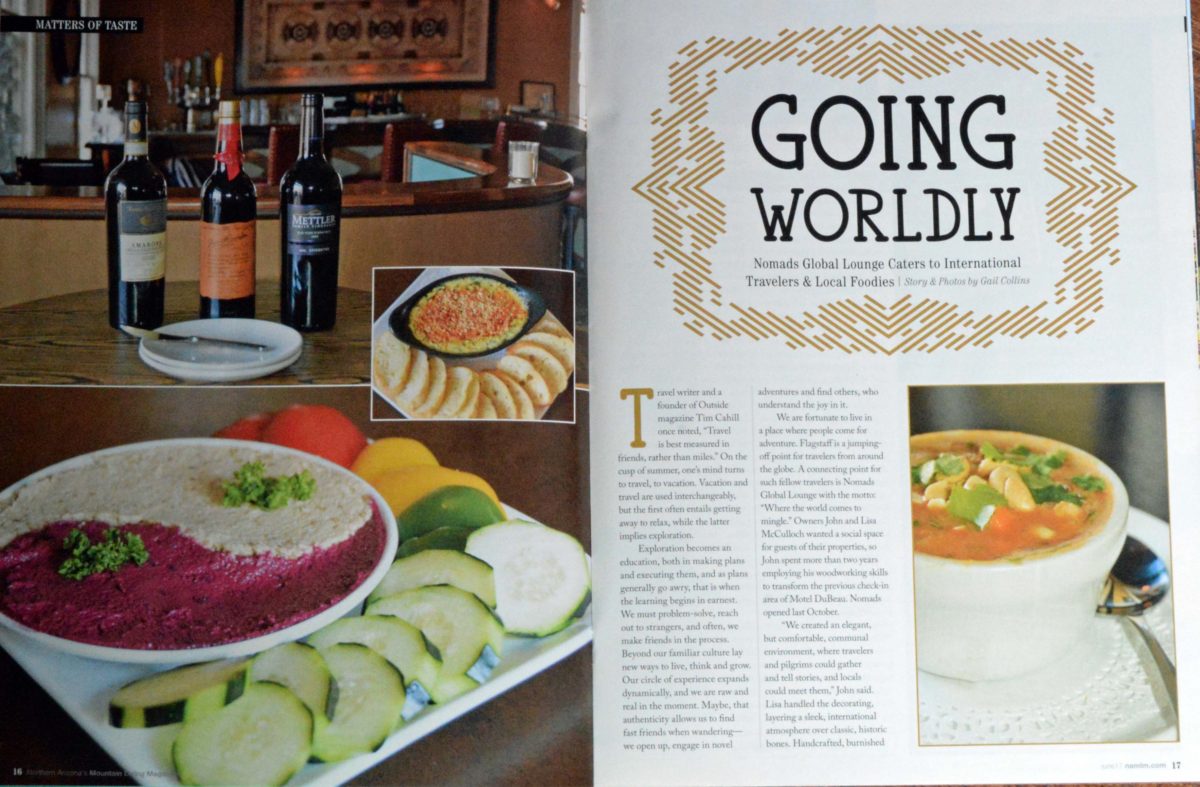 Travel writer and a founder of Outside magazine, Tim Cahill, once noted:  “Travel is best measured in friends, rather than miles.” On the cusp of summer, one’s mind turns to travel, to vacation. Vacation and travel are used interchangeably, but the first often entails getting away to relax, while the latter implies exploration.

Exploration becomes an education, both in making plans and executing them, and as plans generally go awry, that is when the learning begins in earnest. We must problem-solve, reach out to strangers, and often, we make friends in the process. Beyond our familiar culture lay new ways to live, think and grow. Our circle of experience expands dynamically, and we are raw and real in the moment. Maybe, that authenticity allows us to find fast friends when wandering—we open up, engage in novel adventures and find others, who understand the joy in it.

We are fortunate to live in a place, where people come for adventure. Flagstaff is a jumping off point for travelers from around the globe. They bring their ways to us! The connecting point for such fellow travelers is Nomads Global Lounge with the motto:  “Where the world comes to mingle.” Owners John and Lisa McCulloch wanted a social space for guests of their properties, so John spent more than two years employing his

“We created an elegant, but comfortable, communal environment, where travelers and pilgrims could gather and tell stories, and locals could meet them,” John said. Lisa handled the decorating, layering a sleek, international atmosphere over classic, historic bones. Handcrafted, burnished wood, leather seating arranged for chatting, bold colors on the walls and global destinations on frameless canvases give Nomads a timeless, yet yearning-forward, feel. The duo built a background in customer service before buying the Downtown Motel in 1997 and Motel DuBeau Travelers Inn & Hostel in 2000 to provide beds for 90 travelers.

“It’s a quiet place to come after the theater, for parents dropping off college kids, a pre-game meet-up or a nightcap after dinner,” said John. The bar aspects include a variety of international wines and beers, plus cold pints of Boddington’s and 90 Schilling, specifically. Can’t decide on a wine? John suggests sampling sips.