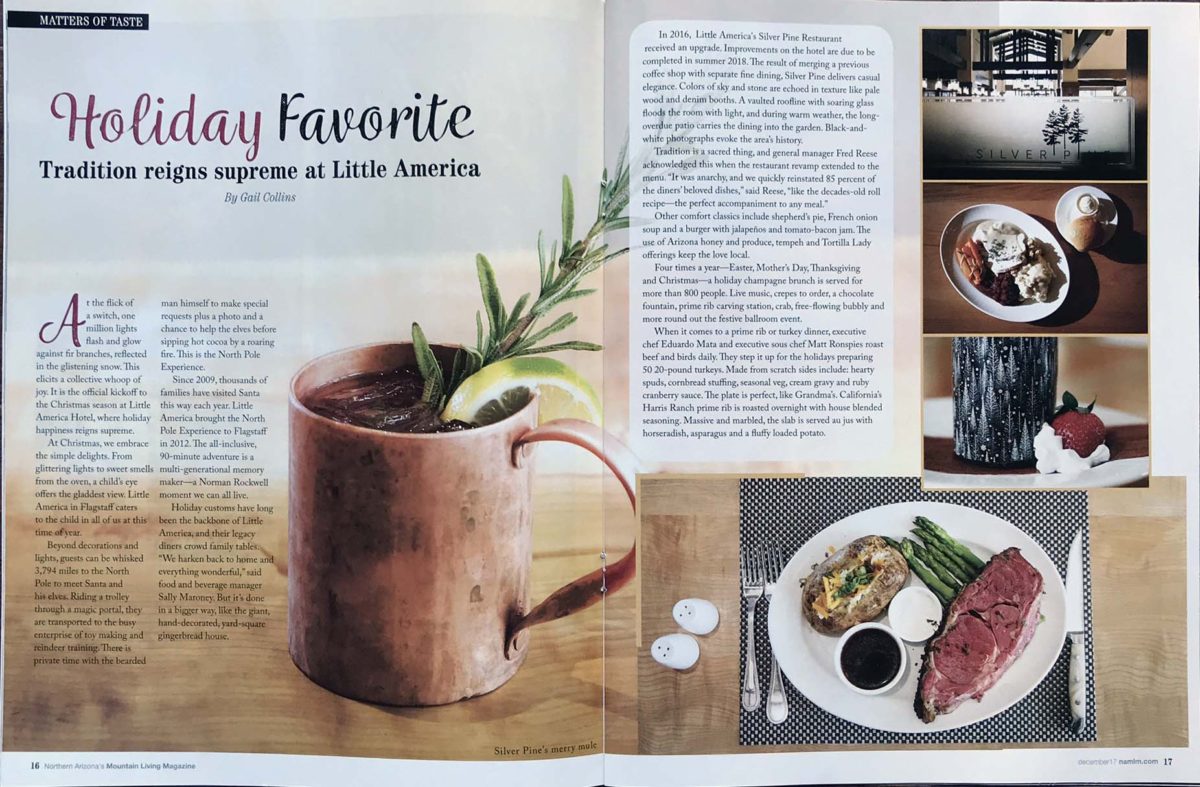 At the flick of a switch, one million lights flash and glow against fir branches, reflected in the glistening snow. This elicits a collective whoop of joy. It is the official kick off to the Christmas season at Little America in Flagstaff where holiday happiness reigns supreme.

At Christmas, we embrace the simple delights. From glittering lights to sweet smells from the oven, a child’s eye offers the gladdest view. Little America caters to the child in all of us a this time of year.

Beyond decorations and lights, guests can be whisked 3,794 miles to the North Pole to meet Santa and his elves. Riding a trolley through a magic portal, they are transported to the busy enterprise of toy-making and reindeer training. There is private time with bearded man himself to make special requests plus a photo and a chance to help the elves before sipping hot cocoa by a roaring fire. This is the North Pole Experience.

Since 2009, thousands of families have visited Santa this way each year. Little America brought the North Pole Experience to Flagstaff in 2012. The all-inclusive, 90-minute adventure is a multi-generational memory maker—a Norman Rockwell moment we can all live.

Holiday customs have long been the backbone of Little America, and their legacy diners crowd family tables. “We harken back to home and everything wonderful,” said food and beverage manager Sally Maroney.  But it’s done in a bigger way, like the giant, hand-decorated, yard-square gingerbread house.

In 2016, Silver Pine Restaurant received an upgrade. Improvements on the hotel are due to be completed in summer 2018. The result of merging the previous coffee shop with separate fine dining, Silver Pine delivers casual elegance. Colors of sky and stone are echoed in texture like pale wood and denim booths. A vaulted roofline with soaring glass floods the room with light, and during warm weather, the long-overdue patio carries the dining into the garden.  Black and white photographs evoke the area’s history.

Tradition is a sacred thing, and General Manager Fred Reese acknowledged this when the restaurant revamp extended to the menu. “It was anarchy, and we quickly reinstated 85% of the diners’ beloved dishes,” said Reese, “like the decades-old roll recipe—the perfect accompaniment to any meal.”

END_OF_DOCUMENT_TOKEN_TO_BE_REPLACED 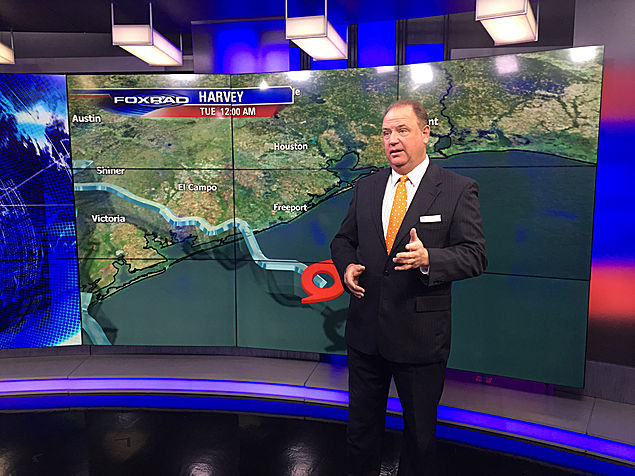 “It was the best of times, it was the worst of times.” The iconic opening to A Tale of Two Cities by Charles Dickens could’ve described the Houston area during Hurricane Harvey. The cataclysmic event of wind and water tested the Bayou City and surrounding communities, spawning powerful stories of heroism, help and the human spirit.

Be Alert, Be Calm, Be Wise

Leadership is paramount in times of trial. Throughout Harvey, people needed information, direction and support. Fox New 26 Chief Meteorologist and Katy resident Jim Siebert provided it through television broadcasts, Facebook Live dialogues and Twitter Q & A. Alongside weekend and morning forecasters, the team worked in eight-hour shifts to cover air time and engage the public personally. “Hundreds of thousands on Facebook needed help with specifics for their areas, and we offered feedback,” says Dr. Jim. The overriding message on every front was:  Be calm, be alert, be wise.

A week before Harvey hit, the meteorologist sat in his home office, mulling over computer weather models. His wife, Debbie, came in, and was disturbed by what she saw in his face. “I knew it would be bad,” says Dr. Jim. “None of the solutions for the path were good ones.” Stalling was the great fear. “No one anywhere had covered a storm like Harvey. Allison was devastating, but the areas impacted were limited. Every storm has its unique set of hazards,” he admits. “Harvey will go down in the history books.”

Foreseeing trouble, Dr. Jim booked into a hotel near the news station for a week and aimed for six hours of sleep a night. Fox 26 is prepared for extreme situations and can actually house employees for a month. There are cots and supplies, including generators and fuel. Dr. Jim kept up with family through texts. “The worst part of my job is leaving my family.” The Sieberts have a plan to stay safe, and friends support them in the Dr. Jim’s absence.

Social media played an integral part in spreading information and personalizing support efforts throughout the hurricane. It also allowed Dr. Jim and team to talk to people in their homes and offer the latest news. Sometimes, bad information was posted by trolls, like the photoshopped shark on the West Park Tollway, but at other times, it was more subtle. This created some fear and skepticism. “The good far outweighed any bad,” he says.

In the storm’s aftermath, one Katy family with horse property near George Bush Park had no electricity or access. They made a Facebook plea for help. A friend of a friend of a friend connected and brought a boat to help with the family and horses. The family, then turned around, and assisted others. “It’s so very Texas, and there are thousands of stories like that,” says Dr. Jim.