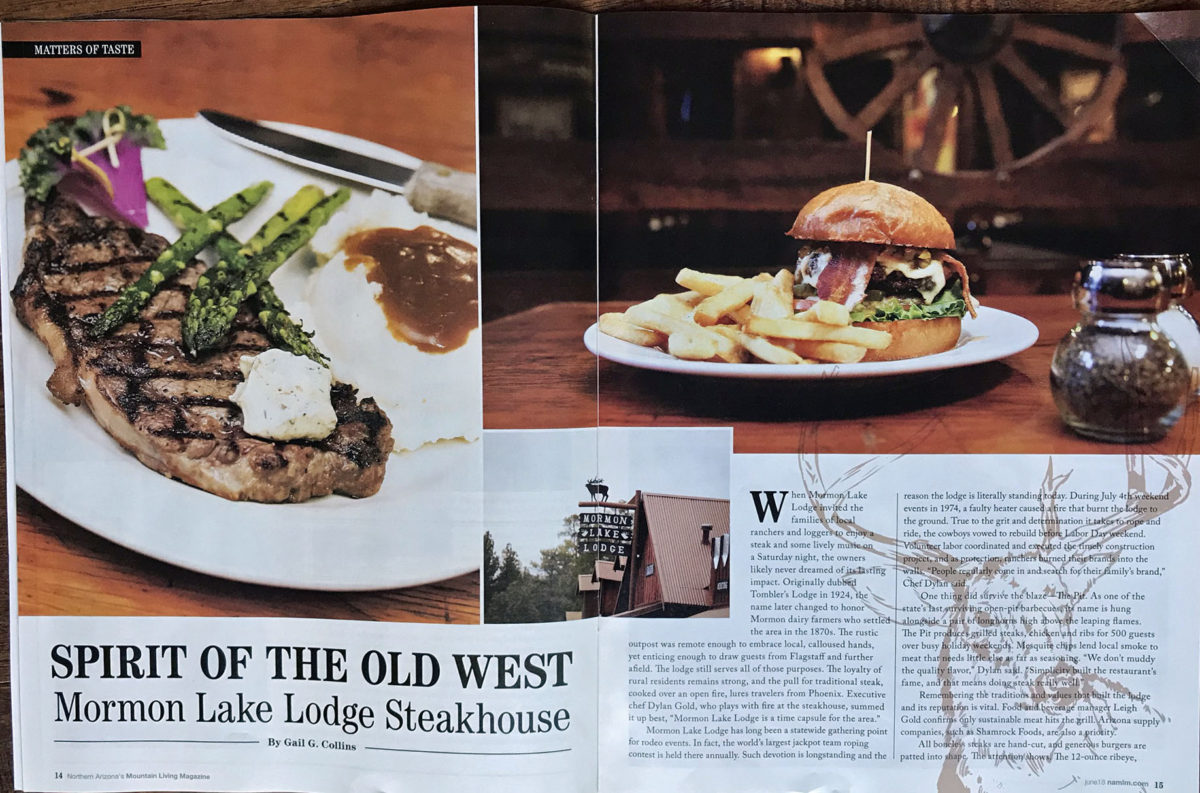 When Mormon Lake Lodge invited the families of local ranchers and loggers to enjoy a steak and some lively music on a Saturday night, the owners likely never dreamed of its lasting impact. Originally dubbed Tombler’s Lodge in 1924, the name later changed to honor Mormon dairy farmers, who settled the area in the 1870s. The rustic outpost was remote enough to embrace local, calloused hands, yet enticing enough to draw guests from Flagstaff, and perhaps, further afield. The lodge still serves all of those purposes. The loyalty of rural residents remains strong and the pull for traditional steak, cooked over an open fire, lures travelers from Phoenix. Executive chef Dylan Gold, who plays with fire at the steakhouse, summed it up best, “Mormon Lake Lodge is a time capsule for the area.”

Mormon Lake Lodge has long been a statewide gathering point for rodeo events. In fact, the world’s largest jackpot team roping contest, is held there annually. Such devotion is longstanding and the reason the lodge is literally standing today. During the July 4th weekend events in 1974, a faulty heater caused a fire that burnt the lodge to the ground. True to the grit and determination it takes to rope and ride, the cowboys vowed to rebuild before the next event, Labor Day weekend. Volunteer labor coordinated and executed the timely construction project, and as protection, ranchers burned their brands into the walls. “People regularly come in and search for their family’s brand,” Chef Dylan said.

One thing survived the blaze—The Pit. As one of the state’s last open-pit barbecues, its name is hung alongside a pair of longhorns high above its leaping flames. The Pit produces grilled steak, chicken and ribs for 500 guests over busy holiday weekends. Mesquite chips lend the local smoke to meat that needs little else as far as seasoning. “We don’t muddy the quality flavor,” Dylan said. “Simplicity built the restaurant’s fame, and that means doing steak really well.”  END_OF_DOCUMENT_TOKEN_TO_BE_REPLACED