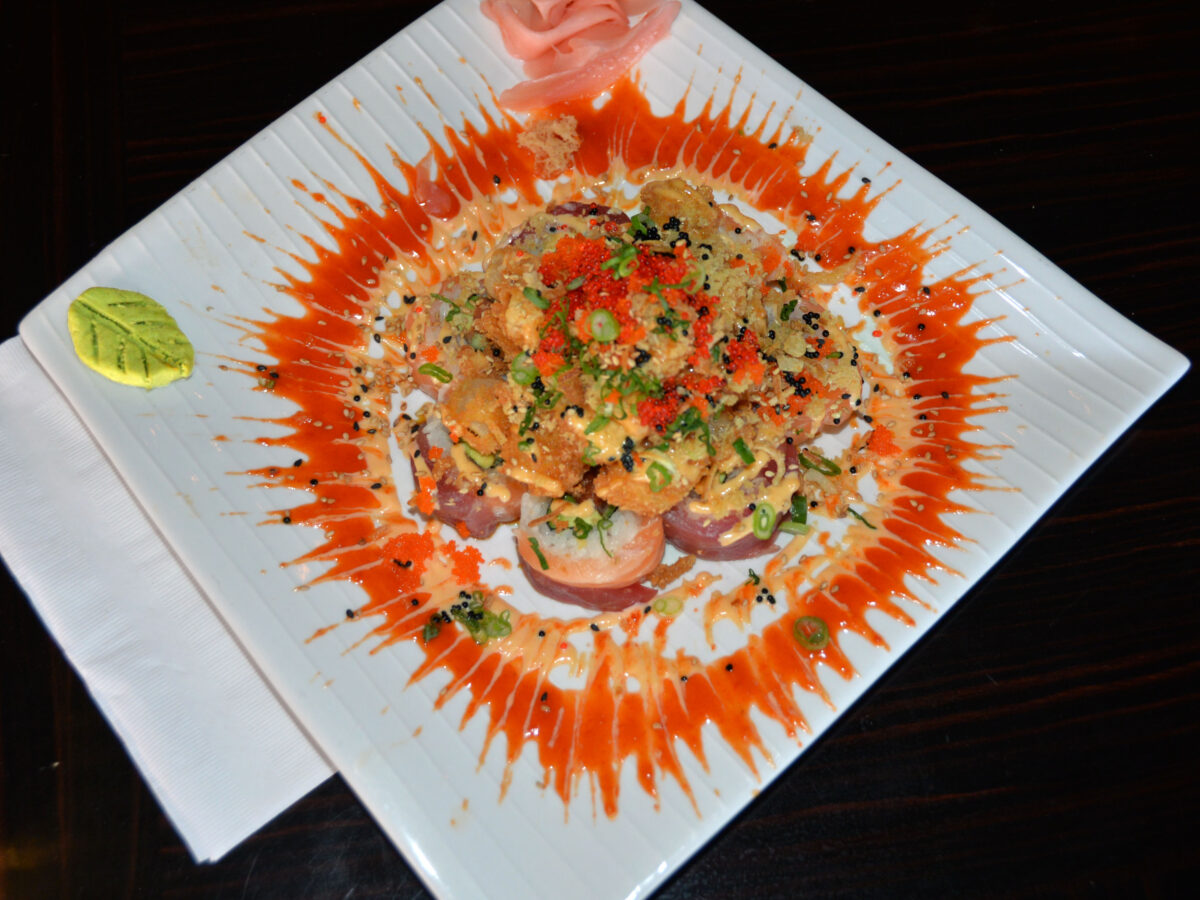 When it comes to drama, it’s better on the stage than in the kitchen. Just ask Charlie Chortabtim, who has worked in television and under a Michelin-starred chef. As executive chef for Hyatt, he ran culinary teams and suffered under the tyranny of secretive chefs, but it all brought him to Flagstaff for a bit of fun and artistic innovation.

“I’m focused on food,” said Chortabtim, describing his vision for Go Sushi, located in the Sherwood Forest Shopping Center on Milton Avenue. “Every dish has to ‘wow.’ If it’s a California roll, it has to be the best in Arizona. This inspires me!” His eyes flashed as he leapt from his chair, telling a story of a couple who confessed to paying $500 for sushi in Las Vegas yet confirmed that Go Sushi was better. “I’m honored.”

Partnered with Apple Krathinthong, the Asian eatery stole onto the scene last April. Both restauranteurs had previously worked at Pato Thai, where they garnered an understanding of the local palate. For several months, the partners readied Go Sushi, engaging customers with previews, tastings and menu play.

The ambience also ramped up as Chortabtim cut metal sheets for the ceiling and strung lights for a Zen garden feel. The irregular bar is polished to highlight the grain, and behind it, shelving and iron art create bento box intrigue. Cheap décor or found objects, like a bird cage, mix with higher end lighting to reflect an inimitable charm.

The last effort was building a team of five line chefs. Chortabtim said he prefers newbies with a passion to learn, “You don’t bend bamboo.  Previous experience just gets in the way.”

“I’m tough,” he admitted. “It’s serious training and rough at the start, but I’m proud of their progress. In a year, they have trained from zero to difficult skills.”

As if on cue, Chef Shawn Hongeva produced a mountainous sushi roll, dubbed Indiana Jones. The colossal mass is built on wrapped big-eye tuna and premium grade salmon, crab, avocado and cucumber with pango scallops, resembling boulders that could tumble down as in the movie. Strewn with the house sauce—a scratch sriracha mayo—and tobiko eggs (flying fish roe), the plate presents a delicious spectacle.

“I’ve learned a certain kind of finesse and flow,” Hongeva said of his sushi instruction, “fine-tuning technical aspects to be efficient.”

Quality matters, and ingredients are flown in or Krathinthong heads to Phoenix in pursuit of the best. The red curry is a creamy, fragrant example of the drive for authentic elements.  The classic dish of coconut milk, lemongrass, shaved chicken, slip-thin carrots and green beans is Thailand in a bowl.

Chortabtim takes the time to be artistic, a trait he learned while apprenticing under Suzuki Jin. The Michelin-starred chef has been described as intense in his training and traditions, slicing a daikon radish so thin one could read through it. Exposure to a “Korean kid, who was modern in his skills,” Chortabtim explained his niche style as combination of their strengths.

When Chortabtim is focused on food, innovation can strike anywhere—even the shower. That explains a fusion roll called Titanic. The crowd-pleaser is nearly crowd-sized on an enormous boat-shaped plate. Rich with crab, spicy tuna, eel, cream cheese and avocado, the whole is wrapped in a tortilla and deep fried with a drizzle of house sauce. Or try the Aribiki Izakay, featuring imported, Japanese sausages nestled in sautéed onions and shitake with melted mozzarella cheese and a tangy sauce.

For dessert, the choices are equally adventurous:  mochi ice cream or fried cheesecake sundae in a martini glass.

Earnestness for excellence permeates Chortabtim’s 20-plus years’ experience, and he praises others, especially his steadfast partner Krathinthong. He also prefers his chefs to shine.

“I share knowledge—no guarding secrets [in the kitchen]. If you can be better than me, I’m proud.”

In general, it’s his belief that putting your heart and head into it and giving it your all will make things great. Perhaps it’s true, as social media praise of Go Sushi is high. Every weekend, the place is packed with five chefs on duty.

Expansion plans include more Japanese desserts, a Taste of Thai line featuring genuine dishes that are “not Americanized,” Chortabtim stressed, and individual Go Pots or shabu-shabu. The traditional pot of thinly-sliced, boiled meat and vegetables is served with dipping sauces. The onomatopoeic name is derived from the sound of a stirring pot.

Stirring the pot seems to have been the goal for Go Sushi, as they carve out a niche menu in an unassuming locale with more plans ahead. NAMLM