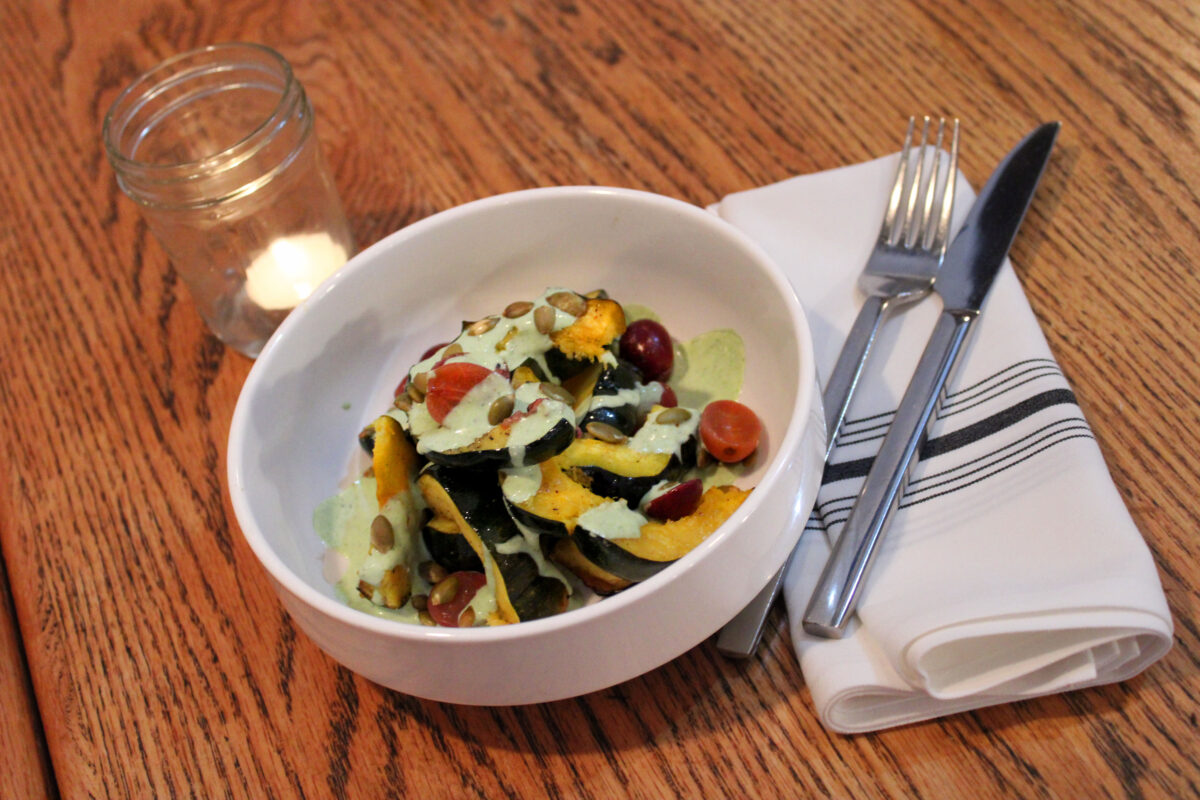 Behavioral experiments have shown people who share a meal trust one another more and work together more effectively. An informal survey of 2,000 people in the United Kingdom, revealed those who eat together socially more often, have larger circles of friends and higher satisfaction in their lives. So, there you have it—all the excuses you need to meet a friend and share a meal.

ShiftFLG Kitchen + Bar was consciously developed with these aims.

“We wanted to change the food scene in Flagstaff from meat and potatoes to a big city touch,” chef-owner Dara Wong explained, reiterating the appeal of her neighborhood bistro. “Come in—even if you’re on your own—and sit at the bar, watch the action in the open kitchen and enjoy some small plates.”

The smaller-sized portions encourage exploration, and the constantly changing menu gives diners a reason to stop in again and again.

Shift maintains a philosophy of local sourcing with an emphasis on quality. Executive chef Christian Lowe is especially keen to highlight those wares, whether it is Arizona-grown corn for the polenta or microgreens. Raised on a farm in Virginia, Lowe holds degrees in culinary arts and restaurant management with world-class experience gained at luxury resort Amangiri. Moreover, she embraces Arizona’s beauty and indigenous cuisine.

Although Shift’s menu fluctuates more than other eateries, there are standards, like the pickled fries. Potatoes are brined before frying for tang without losing crispiness. The breadboard swaps elements, such as the butter or cheese—currently, lavender butter and whipped Boursin—but it remains consistent in character. Olives, smoked over a hickory-fed hibachi, accompany the board.

Menu staples, like burger and pasta dishes, rotate flavors seasonally. The moco loco burger shows off its Hawaiian roots, swamped with gravy, a fried egg and puffed rice. A side of macaroni salad completes the island motif. Two or three kinds of pasta offer choices from tagliatelli with wild boar ragu to spinach gnocchi to mac ‘n cheese with adult indulgences—cavatappi with rendered pepperoni, gorgonzola mornay and cheddar streusel.

For a light finish, consider a refreshing scoop of the gelato or sorbet, such as watermelon with chevre and pea tendril, beautiful to behold and spoon up.

Community is the lifeblood of a small town, and Shift plumbs those opportunities. For Valentine’s Day, Shift partnered with Mother Road Brewery to curate a menu coupled with their craft beers. Shift runs a monthly bake sale every first Saturday. Guests can buy a pastry for half-price, and it will be donated to groups like the men’s or women’s shelters, hospital divisions or a fire station.

Wong has passion, and it carries forward through her team to guests. Building an environment where people want to work is bolstered by good pay and appreciation that extends to life beyond the job. General manager Caitlin Wood, who brings a Midwestern work ethic to Shift to ensure a perfected dining experience, understands that passion.

Wong comes from a family of entrepreneurs and earned a business degree at the University of Denver, but hospitality called louder. She needed a way to express herself creatively and furthered her aspirations with a culinary program at Cook Street School of Culinary Arts. That is where her love of pastry and wine began. Wong holds a Level 1 sommelier accreditation, and Shift’s wine list reflects her skill with bottles, ranging from points in Europe to Australia and neighboring California.

Last September, Wong expanded her empire by purchasing Vino Loco to serve as a complementary business to Shift. The shop caught her eye for its nearby location and thrust, which can serve as a waiting room for Shift or a wine bar augmented with plates from Shift’s kitchen. Rebranding with Shift is upcoming to personalize the spot as Oeno, a play on the Greek word for wine and short for oenophile—a lover of wine. Cheers to that!

“Our success is from locals, and we love to create relationships with them, calling them by name. It’s like seeing our family, and it’s where the pride comes in.” NAMLM