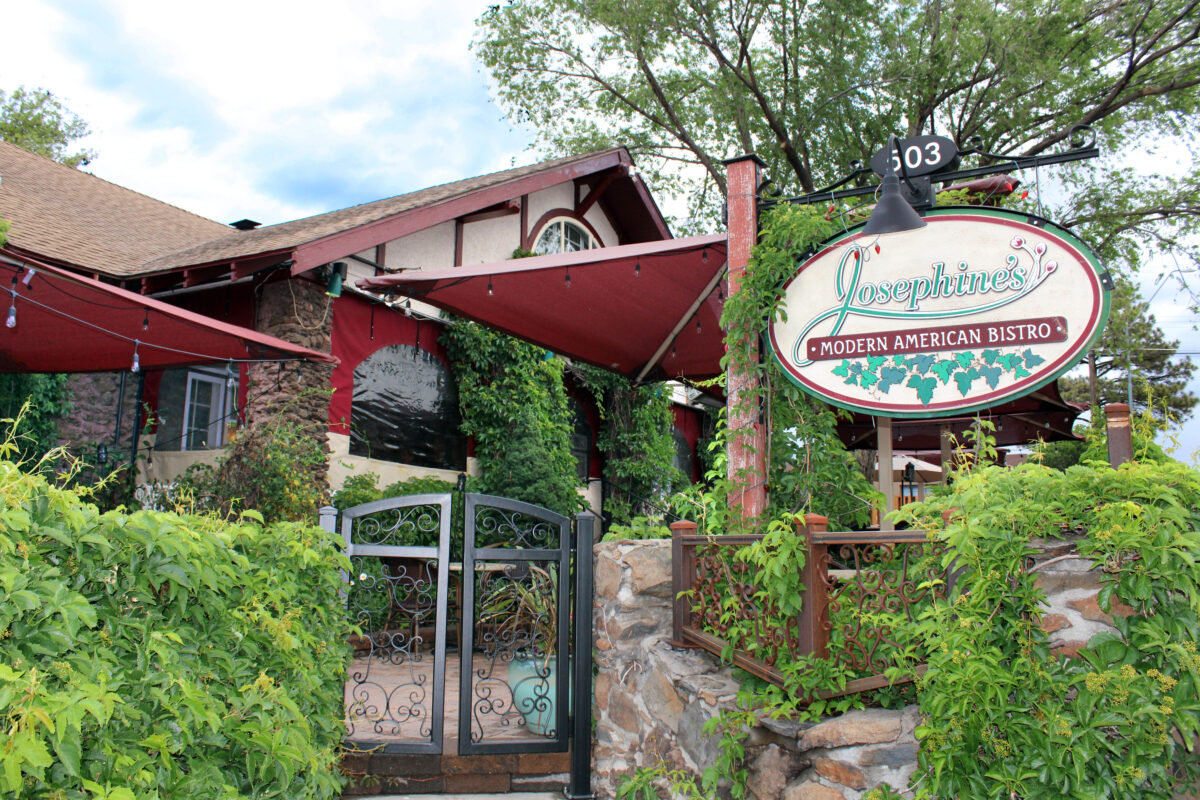 An anniversary is meant to be celebrated. Doing so demonstrates the event was significant. It also gives us the chance to reflect and push forward. Importantly, an anniversary nudges us away from our daily work to honor and rejoice in its results.

For Josephine’s Modern American Bistro, twenty years of business has added up to some well-deserved praise. Diligent and happy patronage voted it Best Fine Dining this past year, and chef-owner Tony Consentino earned the title, Chef of the Year.

Alongside his wife Marlene, Consentino said, “We’re present on the premises every day with administration and cooking. Marlene takes care of the intangibles—hugs and behind the scenes help, adding warmth.” He attributes Josephine’s appeal to, “the atmosphere and consistency of customer service and food.”

Like the landmark it is, sitting above downtown Flagstaff, the bistro exemplifies a relational tie to the historic home in which it resides. The Craftsman home was once owned by John Milton and other noteworthy figures. Built in 1911 and faced with native, volcanic malpais, it is listed on the Register of Historic Places. Like the home, Josephine’s has stood the test of time as a treasure in the neighborhood.

“We haven’t sat on our heels,” said Consentino.

This past year, Josephine’s enlarged its patio, installing new pavers and permanent umbrellas, heaters and a fire pit for an extended outdoor dining season.

Josephine’s serves upscale American fare with a southwest edge. The food is classy and classic, switching it up seasonally to keep guests intrigued.

To start, consider the crab cakes, dressed with lemon, cabbage cress and thinly-sliced ginger and served with avocado tomatillo sauce and spunky remoulade. The soft cakes hide a spike of heat, which benefit from sipping the Joel Gott Sauvignon Blanc. Or order as an entrée with cilantro rice and jicama slaw.

The phyllo-wrapped baked brie builds on baklava with chopped pistachios and orange cardamom, drenched in Black Canyon honey and scattered with berries.

Leaning toward the lighter side? Try the seared Scottish salmon, sauced with lemon caper beurre blanc, shaved fennel, basil chiffonade and fried capers. Served with muffuletta mozzarella couscous, each morsel is a tantalizing mix of protein, zing, salt, sea and mystery. The menu suggests Gabbiano’s pinot grigio. Explore the wine list—it has been cited by Wine Spectator’s Award of Excellence for years running.

For a finisher or delight with a glass of wine, the zeppoles are a bite of heaven. The ricotta beignet is semi-sweet with custard and raspberry coulis plus homemade berry jam—the most grown-up jelly doughnut.

Josephine’s finds strength in its staff. “I know, it’s cliché,” said Consentino, “but we’re a close-knit family.” Some are actually related, like front of the house manager Luis Hernandez, who has been on staff since high school, beginning as a busboy. Others have been around so long they have become family, like Manny Ramirez, chef de cuisine for the past dozen years. “Everyone loves Manny, and customers even give him presents.” Working as a team, Consentino suggests dishes and ingredients, while Ramirez improves on the idea. “It’s a brightness he provides.”

Recently, Josephine’s turned its focus to cocktails, benefitting from upscale product and purveyors’ workshops while trading on experts in mixology. Developing drinks with a gourmet approach via ingredients and garnishes yields smashing sippers, like the espresso martini with coffee liquors.

Soon, Josephine’s will introduce a Boles Aero trailer as service for cocktails on the patio. This vintage venue will pump the energy in the revamped space offering more reasons to stop in for a drink and small plates.

Though inflation is plaguing all of us, it impacts the restaurant industry doubly as guests struggle with budgets while procurement struggles to source quality ingredients at affordable prices. Consentino has found some of his favorite restaurants in other destinations have lowered standards, but he has pledged to maintain value.

Josephine’s honors Cosentino’s mother, who passed away shortly before the bistro opened in 2002. He said, “My mother was inspirational—not food-wise, but in cultivating a certain independence—saying to me, ‘don’t be afraid to get out and live.’”

The chef is carrying forward the legacy of families through Josephine’s. Over twenty years, it has been the place many chose regularly for celebrations or anniversaries. Some have lost their loved ones along the way, but still return to mark that special day and find solace in a meal at Josephine’s.

“Being family-owned, we have a tight connection to the community,” Consentino said. “I just like to cook and do the job at hand.” NAMLM