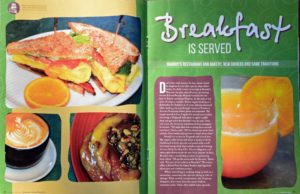 Don’t mess with success. In fact, diners could be forgiven if, over their quiche, they didn’t notice the shift to new ownership at Brandy’s. That was the plan after 20 years, as retiring owners Ed and Brandy Wojciak handed over the keys to Kelsey and Jamie Drayton. In the end, it was more of a legacy transfer. Kelsey began working as a dishwasher for Brandy’s at 15 years old and advanced while working his way through classes at Northern Arizona University where Jamie also attended. The couple moved to Los Angeles for several years before returning to Flagstaff with plans to open a coffee shop and got wind that Brandy’s was for sale. Over two years, the Draytons transitioned from managers to owners. “We kept what was working for a smooth transition,” Kelsey said. “All the dishes are made from scratch, from batters and pastries to hand-sliced fries.” END_OF_DOCUMENT_TOKEN_TO_BE_REPLACED