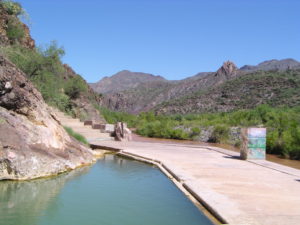 As my truck skittered along Forest Road 708 towards Verde Hot Springs, the pungency of earth and its abundance drifted through my window. People often speak of the journey versus the destination, but this trip held adventure on both accounts – a desert trek and a contemplative soak.

The dirt road’s occasional ribcage of ruts kept my speed to a law-abiding 20 mph – an irony as its distance also measured 20 miles. It rose to butte views and plunged to cross a dry Fossil Creek. Hairpin bends hugged cliffs, looming like weathered faces, and after five miles, a Sharp Curve sign belatedly appeared. It teetered, the result of someone barely negotiating its particular concern.

After monsoon rains, the morning brought these arid wilds to life. Hares galumphed across my path, worrisome quail gathered their coveys up, and squirrels and butterflies kept ground and air surveillance. Ocotillos promised blooms at the ends of plush, pipe-cleaner arms, and spiky medallion prickly pears already bore fruit. No wonder the draw of the Verde River for human wildlife as well. Water enhances life.

Intermittent signs for the springs led to a final descent near the defunct Child’s Power Plant. Here, an altered warning persuaded visitors that ‘Nudity is NOT Prohibited IT’S REQUIRED!’ Free spirits obviously delighted in the place and the idea.

I like fun, but traveling solo into such a romp niggled at me. I pushed my worries aside and parked at the campground in the shade of cottonwoods. The one-mile hike to Verde Hot Springs began upriver at the wooden bridge. As the trail skirted the bank, I scrabbled over limestone and through the tickling grass of a lush riparian habitat. Horned toads scurried underfoot, and the splash of bass on the water captured my attention. I stopped to survey the turbulent chocolate river, usually a vivid teal. This circumstance foretold another surprise for me.

I kept a sharp eye out. At a quarter-mile, near a concrete run-off, the sign for the springs laid sideways, instead of pointing up to another tilted, rusty sign on Forest Road 502. I climbed the embankment to walk the road, scouting for two grass-skirted palm trees located across the Verde.

These landscaping leftovers mark the ruins of a hotel that once capitalized on nature’s hot, bubbly springs. Though therapeutic thermal baths have long existed the world over, their American heyday occurred during the 1930’s. The idea fell out of fashion after World War II, and many resorts fell onto financial hard times. This one burned to the ground in 1962 amidst a rumor of arson. Its baths were my destination. Two concrete pools waited to soothe my muscles and offer a whiff of their trademark sulfur.

With the palms in sight, I crossed a stone beach and forded the river above shallow rapids. A path led to the hot springs ruins whose cliff perch beholds the bending Verde River and expanse of rugged terrain.

The baths average 100 degrees Fahrenheit, and their bubbles rise like beads of champagne through the cloudy, clean green water. One pool sits outside with many a wax octopus – remnants of candle-lit evenings – creeping across its mineral-crusted edge. The second pool lies within a hut constructed of river rock. This bath opens to the sky’s starry nights, yet screens bathers from cool breezes. 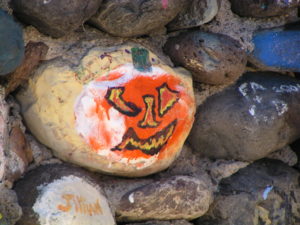 Art abounds. Painters and poets wrestle for space on the walls. Patterns and pumpkins. Latin and Gospel verse. An eagle. A rendition of the original hotel. Rhetoric – End civilization now, back to your caves. Plus an ode to beer. Still, respect resides in shorts hung neatly over the railing with a scrub brush below.

I dipped to the waist and closed my eyes, wishing I could celebrate like past revelers. Suddenly, a dog’s panting prickled the hair on my neck. I turned as a man filled the doorway. My breath caught. The stranger smiled straight, white teeth through a rough, gray beard, and the sun behind made me squint at the 60-something, bare-chested man. In his aviator sunglasses, binoculars and camouflage-flapped hat, he was the kind of person I’d hoped and feared I’d meet here.

I climbed out, and we exchanged hellos. Sam said, “I’ve lived here longer than anybody.” He filled a jug from the pool while his lab, Braxton, licked my leg. “I don’t have electricity or running water, so when the river is muddy, I come to the springs.”

I relaxed. Sam was a Korean War veteran and had spent 12 years studying college courses on the government dole, assuring me, “I know more than most people about most things.”

Two ultralights droned like dragonflies overhead, reminding Sam of something. “Helicopters have been surveying the underground terrain lately. Copper mining is booming, you know.” I smiled and listened.

Sam pointed out the ranching history of the area and its importance as a base range for the bald eagle. This somehow led to infrared imaging and quantum physics. I blanked, so Sam changed gears and delivered a monolgue on global warming, becoming both impassioned and resigned to its course. Reluctantly, I slipped in my goodbye.

Sam saw me to the river and challenged me,” You’re one of those people who has appointments to keep.”

I denied it, but hated that he was right. Verde Hot Springs is a place for letting time slide. Next visit, I‘d bring a sleeping bag, some candles and a few friends. NAMLM  Gail G. Collins

Directions: Take Interstate 17 southbound for approximately 50 miles. Exit #287 at Camp Verde and head east on Highway 260 toward Payson. Travel about 8 miles, turn right onto FR 708. Follow signs on this 20-mile dirt road to Verde Hot Springs. Park at the campground and begin hike upriver, below the plant. The one-mile trail takes about 45-minutes.

Plan Ahead: Bring water, food and a spare tire as the location is remote.