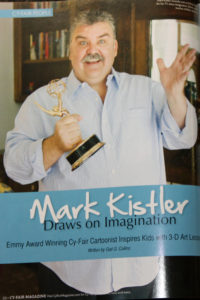 What do ninja eggs, space hamsters, and mighty mini-marshmallows have in common? They are fantasy and any one is the beginning of a great adventure. As a professional cartoonist for three decades, Mark Kistler of Cy-Fair has shared his love of drawing through an energetic teaching style with more than 7,000 school assembly workshops worldwide. “With a powerful imagination and a pencil, anyone can spend the afternoon in the jungle or on the lunar surface,” he shares.

Teaching Millions of Kids Around the World

Kistler began sharing his passion for teaching others about art at the age of 15. “I had a goal to teach a million kids how to draw by the age

of 18 – it took until I was about 21,” he says. Straight out of college, Kistler became Commander Mark on the National Public Television hit series, The Secret City, which pushed his goal well beyond its original mark. His early success in the ‘80s led to the TV shows, The Draw Squad and The New Secret City Adventures, reaching 40 million viewers in 18 countries.

Many of the national broadcasters, as well as the major newspapers have recognized Kistler. Even Saturday Night Live’s comedy crew once spoofed the author, educator, and illustrator. In 2009, the latest 26-episode run of Kistler’s Imagination Station aired on over 100 stations and earned an Emmy Award for its positive messages and appreciation for literature, classic art, science, and the environment. “I want the fun to be educationally engaging and build self-esteem,” says Kistler.

Along the way, Kistler has offered hundreds of lessons on his website, draw3d.com, has fed a child’s eagerness to draw through assemblies and art camps, and has written 10 books with companion

workbooks on drawing in 3-D. His newest book, You Can Draw in 0 Days, is due out in February and will appeal to scribblers of all ages. “Drawing is a learnable skill and a rewarding hobby and it’s incredibly fun,” he says.

Kistler credits educators for steering his talents and strives to return the favor to current students. “I had a phenomenal series of deeply committed and passionate teachers who influenced me, and the

thing I enjoy most is teaching,” he shares. Every year, Kistler gathers a live audience of students in 100 schools to share his pencil power and fresh lessons on time travel, galactic expeditions, and journeys

to the bottom of the sea, all in the name of teaching art. But it’s not all pretend, as Kistler employs his 12 Renaissance words on concepts like size. He also introduces budding artists to the fine work of masters like Michelangelo and Edgar Degas.

In addition to penguins and monsters, Kistler has created a legacy. Former students and viewers like Miley Cyrus, Rex Grignon, who supervised the animation of Shrek and Madagascar, Tim Decker

from The Simpsons, and Don Fraga of Marvel Comics also give back. “These talented students and fans make my animation video lessons and website possible,” Kistler says. Around the world, 40,000 fans  enjoy his virtual lessons and art outreach.

Over the years, Kistler’s lessons have reached millions of youngsters, and more than a million of them have taken the time to respond with their 3-D images attached. On Kistler’s website, he regularly

posts their creativity in his student art gallery. “Everyone has to work, but the lucky ones find something they love to do and turn their passion into a career,” he says. “I want kids to learn the relentless pursuit of conquering their dreams.” CFM