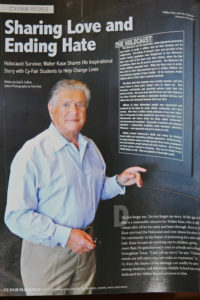 Do not forget me. Do not forget my story. At the age of 81, this is a reasonable concern for Walter Kase, who is still robust after all he has seen and been through. Born in 1929, Kase survived the Holocaust, and now, shares his story with the community in hopes of promoting love and ending hate. Kase focuses on reaching out to children, giving more than 50 speeches every year in schools and colleges throughout Texas. “I just tell my story,” he says. “Children’s minds are still open; you can make an impression.” In Cy-Fair, the impact of his message can be readily seen among students, and Hamilton Middle School has even dedicated the Walter Kase Commons to him.

Telling His Tragic Story for a Better Future

When students enter an assembly where Kase is speaking, one can hear a pin drop. This silent walk of dignity honors the congenial speaker, who always begins his presentations this way: “God decides who we are – what nationality, what race, what religion – and to hate someone for any of these reasons is prejudice.”

Kase strives to relate the dehumanization process of his early years, sharing with students about the confiscation of his family home and business, how Jews were ordered to wear yellow armbands and move to ghettos, the liquidation of those ghettos by sending people to work camps, and the mounting death at every turn. “I was a little boy when the war started, too young to know that being Jewish was a crime punishable by death in a gas chamber,” says Kase. “My sister was shot in front of my eyes – she was 8 years old.”

Though this tragic and horrific time seems unimaginable to today’s teens, it is recent history – as fresh and raw as the tears that roll down Kase’s cheeks, matched by his listeners. As a young man, Kase was stripped naked and made to stand on a selection field where officers decided who lived and died. Kase’s father placed him on a brick to look taller, and another time, changed his son’s birth date to save him from the machine gun. “Who could imagine a civilized country like Germany could do these things?” says Kase. “I feel compelled to tell the story or history will repeat itself.” 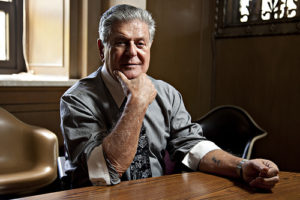 As a member of the Anti-Defamation League and board of directors of the Holocaust Museum Houston, Kase receives regular requests to share his inspiring story. And in return, people send letters. Over the years, tens of thousands of notes, photos, and treasured scrapbooks have come his way. “They call me the life-changer,” saysKase, whose tone is always warm with affection. “Kids connect to me. I talk about their problems – bullying, hate – and they send me very private letters. I tell them not to take things for granted, to be appreciative for what they have, and most importantly, to embrace their parents and say, ‘I love you,’ because that time could be their last.” Kase’s own mother was ripped away from him before he could say goodbye in the chaos of unloading the trains at Auschwitz, the first of five camps he endured.

On May 5, 1944, hope finally began to shine through when an officer in Kase’s camp announced that Germany was losing the war and the prisoners would soon be liberated. Guards climbed from their towers, dropped their weapons, and ran into the forest. “An hour later, those who could walk – not many – broke through the wire fence to a nearby warehouse,” Kase says. What he saw was beyond comprehension. “Every day, hundreds died of malnutrition, and here was food that could have saved their lives.” Kase still chokes up remembering the moment and the absurdity of it.

That day, he poured a bucket of marmalade into his mouth and carried bread, cheese, and meat back to his skeleton father. Then, he followed his father’s advice. “He had a sense of survival about him and told us to carry him to the nearest highway to attract soldiers,” says Kase. An hour later, the rumbling of an army procession met them, the lead tank draped in an American flag. “I walked out on the road with my arms outstretched,” he recounts. “A young soldier 18 at most – said, ‘Oh my God, how could one human being do this to another human being?’” That is always the question when it comes to hate.

An ambulance rushed Kase and his father to a hospital. “I walked in there at 15 years old weighing 65 pounds and walked out a 120-pound human being,” says Kase. Unfortunately, his father died one month after liberation, and suddenly Kase faced life without family, friends, or any skills.

Looking to the Future, While Never Forgetting the Past 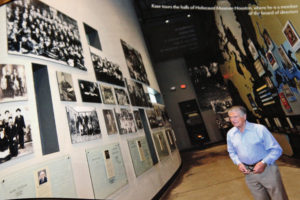 The U.S. Children’s Center stepped in to offer immigration to America for some under 18. Of the 32,000 children who registered, Kase was one of 400 they accepted. When the interviewer asked Kase what he wanted to do, he said, “I want to get an education, to use my mind. I’ll make my way.”

Kase earned a business degree, built a successful import business, and is happily married to his wife, Chris with a blended family of four children. Still, Kase fears mankind too often acts with hate towards one another, so he will continue to tell his story. He shares, “My hope is that young people will change that.” CFM