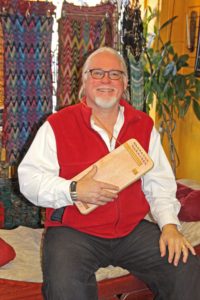 Waves of sound float up as I lie on the monochord Soundwave bed. Thrumming bass notes resonate through my body. Sitting beside me, Kelly McCabe chants, his cascading vocals trailing into a breathy falsetto. A rushing in my head drowns out the world, and I am encouraged to let go, to join something greater. The lyrical grandeur builds, and in my mind’s eye, a ring of rocky ridges appears. Light lifts from these peaks to form immense balls of flame, and then, disintegrate.

These fireworks continue until a bright openness remains. As McCabe continues to strum the monochord’s strings, the lushness approaches choral proportions. Suddenly, I notice a plucking at my knee though my appendages seem to have melted into nothingness. McCabe’s wife, Tessie, beats an accompanying rhythm on the tongue drum beneath the monochord. A presence of power throbs in these reverberations. This circulating sound slowly relents in tempo and volume, and in time, the suffusing hum and thrum falls away.

My first monochord therapy session concludes with a whisper, just as it began. It was not what I’d expected, but then, there are no routine results. Submission to sound healing is a personal affair.

McCabe’s involvement with sound healing may stem from his earlier life as a monk. Six of his fifteen years attached to a monastery were spent in Calcutta, India. As owners of Sacred Rites in downtown Flagstaff, the McCabes act as distributors for Soundwave beds and a host of other monochord instruments from Boehme Music. “I’ve carried sound healing instruments for over 19 years and have never come across anything that I think is as powerful and beautifully simple as the monochord.” McCabe explains this connection by paraphrasing Pythagoras, circa 500 BC, “All knowledge in the universe can be found in the harmonies of the monochord.”

“I just strum it, and the sound does all it needs to do for that given person,” McCabe said, and his wife finishes his thought, “whether it is for the body itself or the emotional side of things.”

A person doesn’t need to believe or understand, McCabe explained in his story about a doctor. The man had endured constant pain from hammer toes and had nothing to lose in a chance trial on McCabe’s monochord bed. Without saying much afterward, the man walked two blocks before noticing his toes weren’t locked up. He returned for another session which straightened them completely.

Tessie talks about a woman who had denied the suffering in her soul. “As she lay on the bed, the woman felt a great weight leave her in a cloud of smoke as she released her grief.” These cases show the outcome of monochord therapy is as individual as the person. Often, an area of need will feel a tugging. That explains the pulling in my knee; the joint had been sore for months. 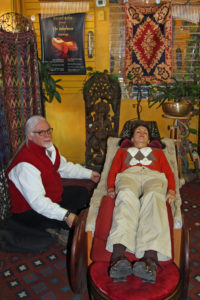 The wooden Soundwave bed is ergonomically formed to resemble a chubby frankfurter. The head is slightly higher than the foot with a full-length pad plus cushions to bridge the knees and neck. This promotes a comfortable experience. Below the bed and running the length of the instrument are 40 strings in three octaves of the same note. In this way, the monochord plays a chorus comprised of just one note. “The strings take you ever higher as the mind layers the music,” Tessie said. “It’s like a choir of angels singing.” The music is easily enhanced by adding your voice as you are moved.

The bed was developed in Germany to release tension and discomfort associated with cancer treatment. Wider use began less than a decade ago. The instrument comes in a range of sizes with many personal models available. Rounded backs on these monochords make it easy to place them against the chest and play in a self-soothing exercise.

The strummed strings carry vibrations like a wave to the surface and into the body. This wraps the mind in a humming and whirring to dissolve tension. “The intention is to provide relaxation and relieve any blockage in the body,” Tessie said.

Pregnant women have sung to their unborn children since eternity began. It quiets the mother and the life within them. Such comfort lingers as mothers later hold their babies to their chest and croon. So it’s no wonder that in pregnancy, an expectant mother finds 30 minutes with a monochord consoling. And that anyone can enjoy this familiar peace throughout their lives.

“It is a lullaby instrument,” Tessie said, “a wonderful way to fall asleep.”

McCabe chimed in, “It requires no talent and puts healing in your own hands. Even a child can play it. Profound truths are the simplest ones, and there is beauty and simplicity in the monochord.” NAMLM