Discovering a Slice of Cy-Fair’s Heritage,
History, and Natural Habitat 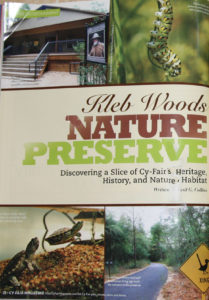 The son of German immigrants, Elmer “Lumpy” Kleb happily lived out his 92 years on his family’s farmland, in a farmhouse lacking in modern utilities but surrounded by the beauty and bounty of nature. Kleb felt a deep attachment to the land and chose to plant trees on it instead of farming cotton or corn like his neighbors. Over time, he produced a wooded retreat and often nursed injured birds.

So engrossed was he in his simple, pleasing subsistence that he neglected to pay over $150,000 in taxes on the property. The government caught on to this, and in 1986, yanked Kleb from his contemplative life into the 20th century. His plight became national news, and lawyers, court officials, and charities came to his rescue. In the end, the land became Kleb Woods Nature Preserve, just as Kleb had wished, and has proven an educational and historical gem of the community ever since.

Welcome to the Country

After exiting the Northwest Fwy., seven miles of country cruising along Mueschke Rd. brings you to Kleb Woods Nature Preserve. The entrance is hard to miss, as is the bold Roadrunner X-ing sign on Draper Rd. It’s a happy introduction to the area’s highlights. The 131-acre preserve features wetlands, forest, remnant prairie, a crop field and garden with granite and mulch trails. There are also scouting-only campgrounds, an educational nature center, and a heritage farm. Fred Collins, director of the nature center, keeps the facility’s schedule humming with activity. He is a busy man who chats in a laid-back tone. Kleb Woods casts a spell, causing folks to slow down, pay attention, and delight in what surrounds them. The preserve draws a steady stream of regulars to bird watch, learn about animal habitats, and understand the local history.

Nearly 200 species of birds inhabit the preserve as year-round residents or migrants, and it’s not unusual to spot 40 different kinds on a walk making it a great place for bird watchers. “All of our tours are fairly popular, but our birding tours bring in the most people,” says Collins. “This spring, we’re going to offer a bird identification class. People have requested it, so we’re going to do it.” The woods contain mainly Loblolly pine, along with eastern cedar, pecan, sugarberry trees, and water, Shumard, and live oaks. Migrating birds favor the hardwoods. Yaupon makes up the understory of the forest where wrens, robins, thrushes, and waxwings find cover. The wetlands draw egrets and herons, while in the open areas, mockingbirds, sparrows, and roadrunners can be spotted.

In addition to birding walks, weekly activities also include history sessions. “Our history discussions have been gaining interest,” says Collins. “We might talk about a history book I’ve read or whatever the groups want to know, so the conversations and topics wander a lot. It’s informal and a great way to dabble in Texas history.”

Texas’ past is rife with German heritage. In fact, Collins mentions a coordinated effort with Germany that encouraged an influx of German immigrants from 1846 to 1884. “We have many, many of these families still in the area, and we try to focus on their culture,” Collins says. Schools make the trek to Kleb Woods, too. “We’re happy to have them,” says Collins. “We’ve had a number of schools with different programs come. Sometimes, they’re focused on history, and sometimes, they’re focused on nature – we can do both.”

There are also regular volunteer work days and opportunities to help in the preserve. People can teach classes, do research, arrange displays, perform archival duties, and of course, participate in the clean-up necessary to manage such a lush environment.

Down the path past the nature center stands the heritage farm’s tool shed with horse-drawn equipment and the Kleb family’s original home. The white clapboard house with aqua shutters framing its many windows is built in vernacular hall and parlor style with gables and a welcoming porch. Things remain as they always were, offering visitors a snapshot of settler life.

“There are lots of reasons to maintain Kleb Woods,” Collins shares. “This property was a typical southern farm, reflecting the culture of corn and cotton, plus there is the German component.” For perspective, Collins offers this statistic: In 1845, 40% of the Houston population was German. Immigrant farmers who prospered also bought land in the Heights and Spring Branch areas. These families built bungalows and worked near the city or used their second homes for seasonal stays or shopping trips.

“There is a big connection between these areas, and keeping its history alive is an important component,” says Collins. “As for nature, the woods planted by Kleb are a retreat. As for education, one day this may be an isolated park surrounded by houses that helps people understand plants, butterflies, and trees and serves as a wonderful resource for those who want to learn.” CFM