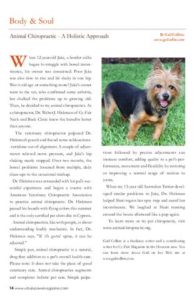 Walter Hickman’s 14-year-old border collie, Jake, had been slow to rise for a couple of years. The dog’s hip became shaky, and he began to suffer bouts of bowel incontinence. Was it old age or something more? The vet confirmed Jake had some arthritis, but chalked up the problems to aging.

A friend led Hickman to animal chiropractic care. Also known as veterinary chiropractic, this drug-free approach to health is based on the same principals as human chiropractic, meaning a disruption of nerve flow to a body area affects its wellbeing. As a chiropractor and owner of Cy-Fair Neck and Back Clinic in Cypress, Hickman knew the benefits of correcting minor subluxations – misaligned vertebrae – better than most. “That’s what I do for people,” Hickman said.

For Jake, a couple of adjustments relieved the nerve pressure, and his hip shaking nearly stopped. Over two months, the bowl problems lessened to the occasional mishap. With older dogs, it is important to maintain a routine of care to help ease age-related symptoms and offer quality years.

Hickman found the Parker course compatible with his training as a Gonstead practitioner, performing precision adjustments to the spine to treat ailments, nutrition and maintain overall health. It is as applicable for small animals, like dogs and cats, as it is to large animals, like horses and cattle. Applying such techniques to animals has existed in anecdotal form in the U.S. alongside caring for people.

So after Hickman completed his exams in 2011, linking his animal and human practice was natural. His people patients brought their pets to him at his animal chiro clinic next door. That first pet also had its owner’s similar complaint – pain. Harrison, an 80-pound collie-mix stood on his dorsum, or with his foot turned under. With some assurance and skill, Hickman resolved the neurology affecting the spine, and Harrison walked properly.

“You keep working on them, until you don’t feel those sticky spots,” Hickman said, referring to joints that are either tight or not articulating appropriately. He advised, “The idea is to be conservative, doing only what is needed until the body takes over with healing.”

Most pets are referred by their vet. So, what kinds of problems can animal chiro address? Neck, back, leg and tail pain can be soothed or solved as well as muscle spasms, nerve issues, disc or joint problems, injuries, jaw anomalies or difficulty chewing, seizures or neurological trouble and any recurring condition such as vomiting, respiratory or urinary infections and constipation.

Unlike people, animals can’t tell their loved ones what hurts. “Animals are hard-wired not to show pain or weakness because in the wild, the weak ones become dinner,” Hickman said. “So in the home, pet owners need to be observant.” Small issues have quick fixes. An animal that won’t look up needs an atlas adjustment. One that refuses to jump up or down has a hip issue, and a horse holding food in its mouth could mean TMJ.

Hickman has always been drawn to animals and is certified to care for horses and more. Sunshine, a Zebu or mini-Braham cow of 350 pounds, was prepping for the cattle show at the Louisiana State Fair. Owner Ken Charba of Blue Sky Ranch noticed there was something wrong with her gait. With a small correction of the sacrum by Hickman, the cow took to the arena where the judge specifically commented on her smooth gait. Not only that, Sunshine won Reserve Grand Champion.

“Generally, I get even more of a speedy response from animals than people,” Hickman said. “Animals display a parasympathetic release – horses will smack their lips or shake or sigh deeply – which means, ‘That feels good.’ A full body shake from any animal is checking out the work done, re-setting their nervous system.”