Lone Star College-CyFair Grad, 83-year old Peggy Wills, schools others in sticking to it and earning a degree 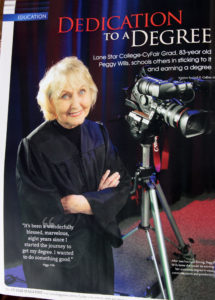 If Peggy Wills had to be described with one word, it would be determined. With her children grown and recently widowed, Wills decided to pursue her college degree.

Working part time and attending classes proved difficult, not to mention she was 75 years old when she started. Still, Wills cheerfully says, “It’s been a wonderfully blessed, marvelous, eight years since I started the journey to get my degree. I wanted to do something good.” Recently Peggy Wills, now 83, earned her associate of arts in visual communications and video and post production from Lone Star College-CyFair.

Wills met David Potts, professor of TV/Motion Graphics at Lone Star College, and he invited her to join his class. Seeing her great rapport skills, he knew Peggy would be successful. The department was new to the college, and Potts had outfitted it with state of the art equipment. There were only eight or so students in that first class, and Potts threw them in headfirst to film a play.

“I hardly knew what the buttons on the camera were for,” Wills says, “but Professor Potts showed me how to turn it off and on, zoom in and out, and walked off. Then, he turned and said, ‘You’ll be fine.’ By the end of the two hours of filming, I’d fallen in love with it!”

Wills confirms that it isn’t as simple as pointing and shooting. It takes long hours of dedication for the demanding job. Other students were much younger, and made it clear she would have to pull her weight. She did, and soon reached iconic status among the students earning the affectionate tag of Miss Peggy.

The class used professional software to edit, and Wills became enthralled. “I can lose all track of time when I am editing.” Early on, she worked on a project on location with other students filming a seminar which is now used for training. “It was a marvelous experience,” she adds.

The road to education has not been easy as Wills had to take time off twice from her goal due to helping a friend manage cancer, and another because she was so ill herself. “I didn’t know if I’d be well enough to continue,” she recalls of the difficult period.

Professor Potts admires Wills’ determination and generosity for others. “It’s rare that you meet someone like Peggy Wills. She has an unusual personality trait – making everyone on a set relaxed, focused, happy, and so young-feeling that the whole room just becomes tingly with excitement.”

About her resolve and work as a part-time Video Lab Coordinator at Lone Star-CyFair, Potts says, “Even after the money in the budget to pay her was gone, she worked the rest of the year for free. That’s the kind of dedication that you cannot teach a person, but it is one of the most important traits that a graduate needs. I’m convinced this has guided her throughout her life.” 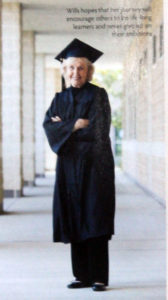 Peggy has attended college before at different points in her life, but was unable to finish. This time, she stuck to it, and encourages others to do the same. “You don’t know what you can do until you try” she says. “There is nothing like learning something new.”

Over the last eight years, Peggy has spent a lot of time working and studying, there are still a lot of things on her to-do list. Utilizing her degree, Wills plans to take some time off to travel and visit a friend who has cancer. Armed with her camera, she will create a video of her friend’s life to share with her grandchildren.