Downtown Flagstaff’s The McMillan Turning into an Instant Classic 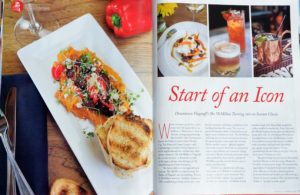 When you have a good idea, and it turns out to be a great idea, you build on it. That’s exactly what an Arizona managing partnership that includes Tyler Christensen—known for Valley hotspots Little Woody, Vig, The King and Linger Longer—did. Capitalizing on underutilized properties to build neighborhood bars and kitchens, their newest venture is The McMillan in Flagstaff. Its historic location on Route 66, as well as the space, revives a family legacy while contributing to a lively downtown.

The latest edition to the upgraded pub concept, The McMillan takes its name from the Father of Flagstaff and the building. Thomas F. McMillan moved to Northern Arizona in 1876, establishing a sheep ranch and a huge business presence, including completion of the building that bears his name. The structure previously housed a bank, a hotel and even an opera house. Christensen said, “The McMillan will bring his story back and restore relevance. It’s about the place and people who live here. We’re a modern tavern—globally inspired and locally sourced.” Drywall was removed to expose original brick, and a lowered ceiling torn down. Planks overhead and an enormous inset paneled bar, from which a portrait of McMillan presides over the house, create a beefy, masculine feel.

The partnership has proclaimed Executive chef Josh Reisner as the Sovereign Master of Food for creating menu magic. He remixes the ingredients of standard recipes and improves them. Reisner is a forager, gleaning greens from woodlands and washes, as well as being a fixture at farmers markets. His aim behind the dishes is, “Simple, humble, good.”

An example is his elevation of the Scotch egg. The customary British brekkie is often prepped and served cold. At The McMillan, the egg is soft-boiled, wrapped in quality sausage and bread crumbs, fried and served fresh with house made HP sauce. The pork belly is savory, grilled, streaky meat on lettuce, piled on a fried, green tomato with cornmeal crunch when available. Add ripe, red toms, bitter greens and locally gathered purslane. Drenched in green goddess dressing, it is a smoky, substantial salad.

The roasted beet salad is loaded with mature beets and baby chunky golden beets, arugula, goat cheese and gooey-filled wontons, all bathed in sherry vinaigrette with basil and walnut pesto. The flavors are fragrant, dirty, tangy and earthy.

The cool ranch chicken and gnocchi is Reisner’s play on chicken wings. A boneless half-chicken becomes succulent inside and crispy outside, cooked under a heated brick. Served with ricotta-ranch gnocchi, garlicky beans that toe the line between garden and blanched for snap, it boasts house made hot sauce.

The heritage Berkshire pork shank is a plateful on grits with crisp hominy, pickled red onions, salty cotija cheese, cilantro and grilled tortillas. The mammoth shank is covered in chef’s molé rojo—fueled with cocoa and nuanced with peppers, oregano, cinnamon and garlic.

The tres leches cake is actually four milks and a story, which involves a big name, a hungry crew, little food and no land in sight. Ask for it. The moist hunk of cake sits under a creamy, cinnamon cloud, gathering its sweetness from vanilla alongside a sampling of syrupy Amerana cherries.

Christensen received an education among Sonoma’s vines, so to accompany these inspired and nourishing mains, there is respectable list of wines. These include a Spanish rioja that borders on port and a Sancerre wannabe with a zip code in Touraine, France that is delicate fruit finesse. The beers offer Arizona play, though not seriously local—leaving that to the breweries—with some fun cans along with the usual suspects.

The McMillan is well-rounded with a private dining area and also has a game room, mixing drinks and fun with low-skill games, like Skee-ball. While items on the menu, such as the porterhouse steak provide destination dining, regulars come in for the best burger, hummus and house-cut fries. Christensen said, “We can make an impression and serve the locals with neighborhood pricing.”