After extensive damage due to Hurricane Harvey, staff members, friends, and city officials roll up their sleeves to rebuild and re-open the iconic cafe in historic Katy on October 30, 2017. 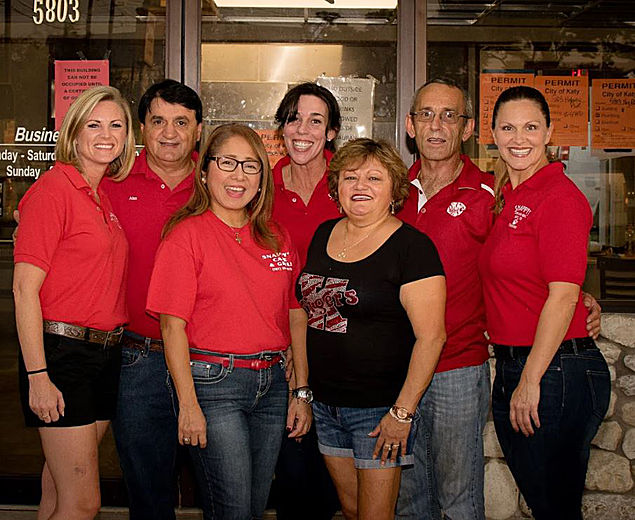 When Hurricane Harvey hit Houston on August 25th, it was a double-whammy for Snappy’s Cafe & Grill. The breakfast and lunch spot is a landmark in the original downtown with a wide range of customers from city officials to industry workers and including Katy Magazine.

The flood waters rose to more than four feet, and partners Bobby Katsabas and Alex Tsounakas faced a rigorous recovery. It was the second time in as many years that Snappy’s had suffered flood damage. The first event was Tax Day 2016. Several inches of water saturated the premises then, but Harvey dealt a brutal blow.

“Everything was destroyed,” Bobby says. “We had to throw everything out, start from scratch and rebuild.”  With only the inspections left to complete, the good news is that the go-to place for biscuits and gravy is slated to reopen on October 30, 2017. Once open, Snappy’s would like to let the community to know that the restaurant will now be 100% smoke-free.

Snappy’s regulars to the rescue

In a storm so fraught with destruction, the best of the city responded, especially diners to whom Snappy’s has become as familiar as family.

Mayor Chuck Brawner and wife Marcy were among the first arrive, followed by a steady stream of regulars.  All wanted to check in with the owners, but stayed to dig in with gloves and trash bags in the clean-up effort. “The Katy Train,” a Katy High School Facebook group also showed commitment to Snappy’s in a big way. Katy is a wonderful town, Alex feels, where everybody knows everybody. “Thank you to all for coming and helping,” the partners say. “The support was tremendous.”

Living the America dream in Katy

Katy’s small town roots are epitomized by Snappy’s. And perhaps, that explains the success. Bobby and Alex came to America as young men. Bobby, at 20 years old, and Alex, only 18, left family behind in the Port of Nafpaktos, where they had no prospects.

Having worked in the restaurant industry for decades, they seized the opportunity to buy a floundering business in 2002. The location in Midway Shopping Center on Highway 90 had been reinvented several times, beginning as a chicken place and becoming a Country Kitchen before being renamed Snappy’s by the next owner’s children. It was a short run of a few months before the present partners took over. The name Snappy’s was catchy, and it stuck.

Many employees are happy long-termers having worked eight, 10 and 14 years. They are emblazoned on the menu in cartoon form. “We’re family,” Bobby says, “and we treat each other well.” The partners also admitted to shouldering the responsibility to pay out-of-work staff during Snappy’s two-month closure. “They have kids and family to care for—it’s the right thing to do.”

Close relationship with their customers

This love relationship also extends to the customers. A number of them have frequented the evolving eatery for 40 years. Malcolm Rebka and his pals often arrive at Snappy’s before either of the owners. “They want coffee at 4:30 a.m., so they have a key, come in and make it,” Bobby says with a laugh. “I’m not getting up that early.” The old timers brew the first pot, read the paper, and chat until Snappy’s officially opens at 6:00 a.m.

Alex and Bobby are related by marriage. They support and spell one another, balancing the breakfast and lunch business between them with weekends off in turns. Bobby and wife Effie have two grown children, Tammy and Aki, who live nearby and enjoy that closeness. The couple is especially delighted with their daughter’s first child, Luke, for whom Effie has cared throughout his first year. Alex’s daughter, Irene, is attending a New York college, and he misses her terribly.

Getting back to the good stuff

The families take the challenges of business in stride. Their goal is to serve their customers a meal worth remembering and worth coming back for.

The menu, unaltered since its inception, is studded with rib-sticking country breakfasts, like ranchero eggs topped by homemade chili, and lunch favorites, like grilled pork chops. They divulged their secret to success—to serve really good food at really good prices.

Not much will be different as far as décor when Snappy’s opens its doors again, and the regulars will relax in that comfort. In the calm after the storm and recovery, they acknowledge, “If not for you, our family, friends, neighbors, and guests, we would not be here.” The feeling is obviously mutual. KM

Katy Magazine would like to send our best wishes for a speedy restaurant recovery and a successful reopening. There’s no place like Snappys!