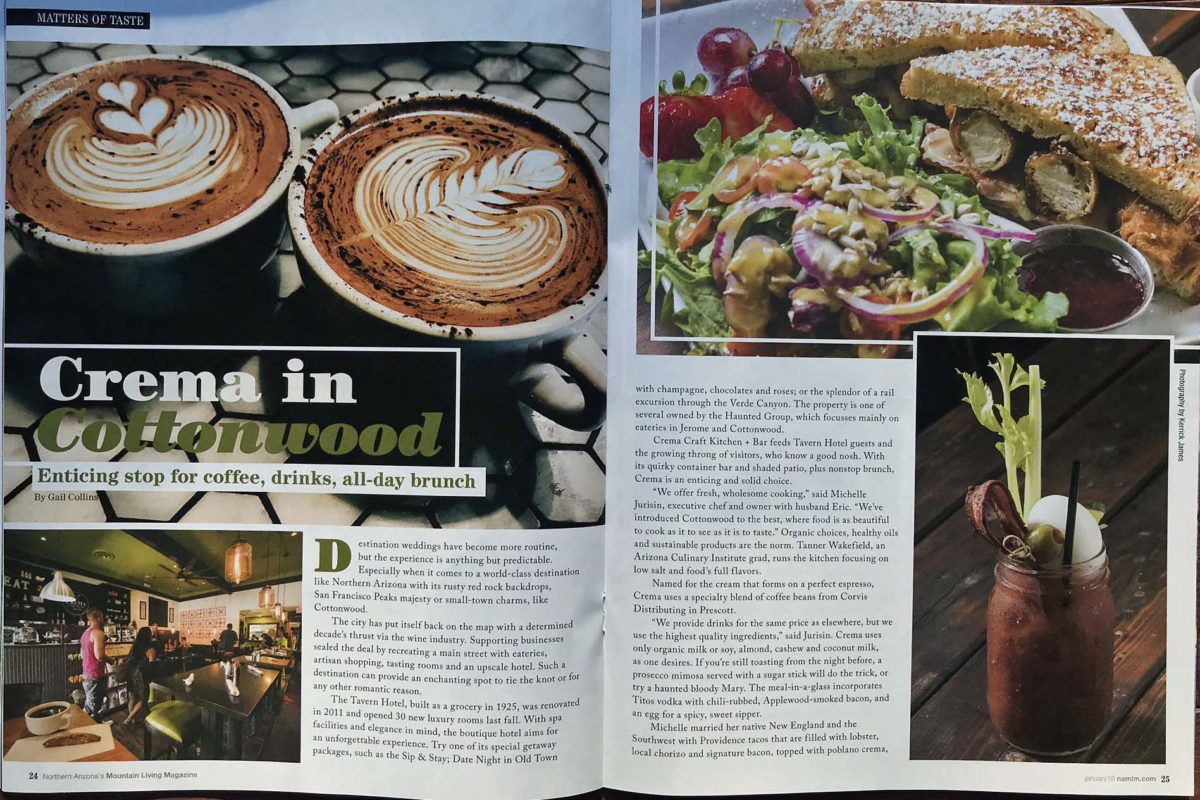 Destination weddings have become more routine, but the experience is anything, but predictable. Especially when it comes to a world class destination, like Northern Arizona, with its rusty red rock backdrops, San Francisco Peaks majesty, or small towns charms, like Cottonwood.

The city has put itself back on the map with a determined decade’s thrust via the wine industry. Supporting businesses sealed the deal, creating a main street flanked with eateries, artisan shopping, tasting rooms and an upscale hotel. Such a destination can provide an enchanting spot to tie the knot or any other romantic reason.

The Tavern Hotel, built as a grocery 1925, was renovated in 2011 and opened 30 new luxury rooms last fall. With spa facilities and elegance in mind, the boutique hotel aims for an unforgettable experience. Try one of their special getaway packages, such as the Sip & Stay; Date Night in Old Town with champagne, chocolates and roses; or the splendor of a rail excursion through the Verde Canyon. The property is one of several owned by the Haunted Group, which focuses mainly on food in Jerome and Cottonwood.

“We offer fresh, wholesome cooking,” said Michelle Jurisin, executive chef and owner with husband Eric. “We’ve introduced Cottonwood to the best, where food is as beautiful to cook as it to see as it is to taste.” Organic choices, healthy oils and sustainable products are the norm. Tanner Wakefield, an Arizona Culinary Institute grad, runs the kitchen, focusing on low salt and food’s full flavors.

Named for the cream, which forms on the perfect espresso, the beans used at Crema are a specialty blend from Corvis Distributing in Prescott. “We provide drinks for the same price as elsewhere, but we use the highest quality ingredients,” said Jurisin. Crema uses only organic milk or soy, almond, cashew and coconut milk, as one desires. If you’re still toasting from the night before, a prosecco mimosa, served with a sugar cane stick, will do the trick, or try a haunted bloody Mary. The meal-in-a-glass incorporates Titos vodka with chili-rubbed, Applewood-smoked bacon with an egg for a spicy, sweet sipper.

Michelle married her native New England and the Southwest with Providence tacos that are filled with lobster, local chorizo, and their signature bacon, topped with poblano crema, pico de gallo and arugula. Michelle’s mother made egg pancakes, bursting with berries, and Crema’s crepes reflect her recipe. “What is cool now are really classics,” Jurisin said. Leftovers are incorporated into the daily frittata, an Italian omelet. “It’s really peasant food and appeals to all.”

The breakfast potpie fills puff pastry with veg and meat, covered in chorizo gravy and served with three-cheesy potatoes. Mix and match opportunities allow any dish to be served with fresh fruit skewers instead. The Monte Christo sandwich combines beer-battered chicken with gruyere and country ham on eggy sourdough—surprisingly light. Or consider jumping off the deep end for red velvet waffles and chicken with house made mascarpone and maple syrup.

Michelle attended a retreat on mindful eating, which is echoed in the menu. “Nothing is off-limits,” she said. “We’re most happy when we have the best balance in life.” She is earnest that good food isn’t cheap, yet it need not cost a fortune. An example is porridge of quinoa and oats, plus banana, seasonal berries, scratch granola and maple syrup for $9.

When it comes to sweets, there is a case of them. Classic is cool, remember, so go for the gooey cinnamon roll. The rich, tender, buttery pinwheel of spice, slathered with homemade mascarpone and bourbon icing is enough to share.

Eric and Michelle Jurisin met at a bar and bought it 15 years later. It’s called Nic’s after their daughter, Nicole, who also works for Haunted Group. “The small things are still important,” she said about food, or was it love? Maybe, eating good food with good people builds the best relationships. NAMLM